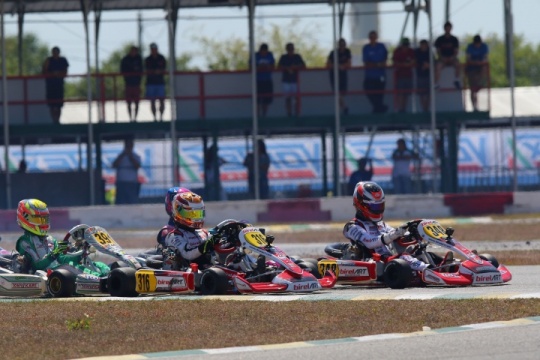 Author: Vroomkart International
It all comes down to this weekend at the Orlando Kart Center for the third and final round of the 2018 ROK Cup Promotions Florida Winter Tour.
Championships will be decided and with an approximate 33% increase in points, stakes are high. With perfect weather conditions expected at the Orlando hotspot, teams will be tested to perfect kart setups and give their drivers the best chance possible. Sunday saw the completion of the 2018 FWT, with prefinals and finals deciding the class champions, with Mini ROK, Junior ROK, Senior ROK, Masters ROK, Shifter ROK and Shifter Master ROK Series Champions receiving 2018 ROK International Finals Ticket for the event in Lonato, Italy in October 2018 and the entire Micro ROK championship podium awarded ROK the RIO prize packages.

On a tear throughout the entire weekend, Caleb Gafrarar dominated the Micro ROK Prefinal, besting Danny Dyszelski by more than five seconds. The Final saw more from the Parolin USA driver, and while Dyszelski put more pressure in the 15-lap main, Gafrarar completed the weekend sweep at the Orlando Kart Center and also claimed the championship in the Micro ROK division. Dyszelski finished second in both the final and the points, as did Matias Orjuela, placing third in each. The trio received ROK the RIO entries for their outstanding FWT efforts, and will be ones to watch in Las Vegas come November.

In ROK Shifter Senior, the Kosmic of Jimmy Cabrera came out on top in Prefinal action, followed by Mathias Ramirez and AJ Myers. A last lap pass in the day’s Final propelled Ramirez to the win and the championship title, with Cabrera finishing the race second and Rubens Barrichello back on the podium in third. Cabrera also finished second on the championship podium with Myers in third.

Peter Licciardi steered his BirelART to a first place finish in the ROK Shifter Masters Prefinal, beating Hernando Sanchez and Farshad Bagheri by nearly four seconds. Another strong run in the Final put Licciardi on top of the day’s podium followed again by Sanchez and TB Kart’s Chris Gannon, who was the Final’s hard charger. In the championship points, Farshad was able to hold onto the top spot to claim the title, with Licciardi Vice-Champion and Michel Legrand in third.