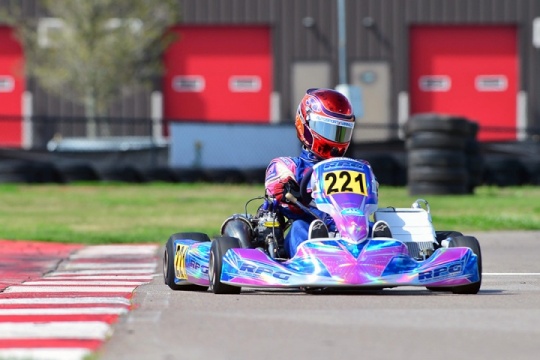 Author: Vroomkart International
Top karting race team scores 10 top-five finishes at NOLA Motorsports Park
WILSONVILLE, OREGON (March 12, 2018) – The first two months of the 2018 season was a busy time for the Rolison Performance Group. Traveling from coast-to-coast put on the miles for the team, and the hard work paid off with victories in both the SKUSA Winter Series and the California ProKart Challenge. The national schedule is now underway following the March 2-4 weekend as the Superkarts! USA Pro Tour WinterNationals were held at the NOLA Motorsports Park in Avondale, Louisiana. The RPG karting race team came away with good amount of hardware for the trophy case, including two victories and a handful of podium finishes.

The victories by Rolison Performance Group came from one driver, S2 Semi-Pro Stock Honda rookie Pedro Lopes. The 15-year-old from Brazil came off a third-place finish in the SKUSA Winter Series championship standings and entered his first SKUSA Pro Tour event in the category. It was a near sweep for Lopes on the weekend, sitting at the top of the results sheet at the end of all but one session. Lopes set fast time in qualifying Saturday, however, slipped back to second in the Prefinal. Pedro battled throughout the 22-lap for the top spot, scoring his first SKUSA Pro Tour victory by seven thousandths of a second. The following day was all Lopes, sweeping the second round of competition en route to a 10-second margin of victory. RPG gained two addition podiums in the category with Cameron Egger in his return to the seat. The Oregon driver placed third on Saturday, improving one spot on Sunday for a RPG 1-2 finish. Victor Jimenez gave RPG a fifth top-five in the Stock Honda ranks, as the Florida driver performed well in his Pro Tour debut in the S4 Super Master class. Jimenez finished fourth on Saturday and was poised to battle for a podium finish on Sunday until an on-track issue put him on the sidelines.

Canadian Samuel Lupien led the way for Rolison Performance Group in the competitive X30 Senior division. Lupien kept himself inside the top-five throughout the weekend, earning one podium finish to establish himself as a championship contender in 2018. The 17-year-old qualified third on Saturday, missing out on the pole position by nine hundredths of a second. Dropping one spot in the Prefinal, Lupien remained in fourth for the Final to earn his best SKUSA Pro Tour finish. Sunday began the same way with Samuel in the third spot after the timed session. Lupien was able to work his way to the point in the Prefinal, scoring the race win. He lost the lead after leading the opening lap of the Final, and while keeping pace with the leader, was unable to move back into the top spot. Lupien scored his first SKUSA podium with the runner-up result.

Also in the X30 Senior category was rookie Hannah Greenemeier. A longtime member of the RPG driver development program, the female driver from Colorado was a shining star on the weekend. After qualifying fourth, issues in the Prefinal dropped her down the order. With fast laps of the Final, Greenemeier advanced 20 positions to the sixth position. She backed up the performance with the second fastest time in Sunday qualifying, missing the pole position by one tenth of a second. Starting on the outside of row one, Greenemeier was a victim in the tight racing, shuffled off the course on the exit of the opening lap. It dropped her down to 24th in the field, however, she fought back to 12th with fast laps of the race. She continued that momentum into the Final, advancing up to fourth. Officials however penalized her two positions for a questionable ‘blocking’ call, placing her sixth in the final classification. Jacob Gulick, a podium finisher at the SKUSA Winter Series, added an 11th place result on Sunday to his CV for 2018.

“It was great to get the SKUSA Pro Tour started with such strong results and performances from our drivers,” stated Rolison Performance Group owner Mike Rolison. “Working with Lopes the last two months in Stock Honda paid off with our first victories in shifterkarts at SKUSA in a long time. With him and Egger, we have two guns fighting for the championship there. The same goes for X30 Senior. Samuel has improved his race craft from last year, and is going to be a threat for victory. Hannah showed the speed and race craft all weekend long and the call by the officials on Sunday was ridiculous. Hannah is among the cleanest drivers in the paddock today.”

Brazilian Paulo Lopes, brother of Pedro, added two podiums of his own in the X30 Master division. Lopes was among the quickest drivers all weekend long, beginning Saturday with a P3 in qualifying. Lopes raced his way to the front in the Prefinal, scoring the win and starting the main event from the pole position. He led the first 12 laps until contact pushed him off-course, and down to the third position. Lopes stayed there, missing out on the victory yet earning his first SKUSA Pro Tour podium. Paulo was on the chase all day Sunday, unable to return to the front of the field. Lopes was second in qualifying, placing third in the Prefinal and Final. A penalty after the main event promoted him to second, provisionally putting him as the championship leader going into the SpringNationals.

Momentum was on the side of Micro Swift RPG driver Graham Trammell. Victory at the California ProKart Challenge opener in February helped build the confidence toward his SKUSA Pro Tour debut. Trammell was P3 in his first qualifying session, only 15 hundredths off the fast time. Graham kept himself in the lead group during the Prefinal, placing fifth. He was in a hotly contested battle for the spot throughout the Final, able to reach the checkered flag in the fifth position for his first top-five result at the SKUSA Pro Tour. Sunday began well, sitting inside the top-five after qualifying however on-track issues hurt his results in the Prefinal and Final.

“Overall, we had a great WinterNationals in NOLA,” continued Rolison. “A total of 10 top-five finishes is an awesome way to start the championship program. I know we could have had a few more in there, and our other drivers made progress toward their goals on the weekend. The testing time before hand proved to be very valuable in collecting data and getting the drivers accustom to the NOLA circuit. It is going to be an exciting 2018 SKUSA Pro Tour championship season.”

Rolison Performance Group is now looking forward to returning back to California for the second stop of the ProKart Challenge, scheduled on March 30-31 at the ultra-fast Streets of Willow course in Rosamond, California. The month of April is testing time, as RPG prepares for the second stop of the SKUSA Pro Tour, moved to the Phoenix Kart Racing Association in Glendale, Arizona on May 2-4. Quickly after, the team returns home for the opening event of the Can-Am Karting Challenge on May 19-20 at the Tri-City Kart Club in Richland, Washington.