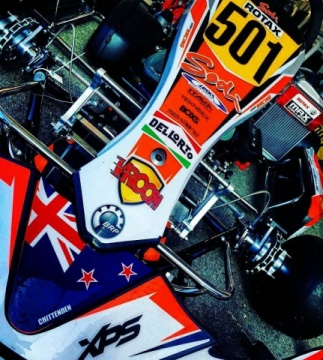 Author: Vroomkart International
The start of the Rotax Max Challenge Euro Trophy is near: it begins in Genk on 20 April.
The Rotax European season is ready to write another page of its history with the 2018 edition starting in Belgium, in Genk, the weekend of 22 April. The Rotax Max Challenge Euro Trophy brings a breath of fresh air into the universe of one of the world's best-selling single-brands.

Let's see the most important items:

The Camp Company era begins - The first change concerns the organizer, the mandate entrusted to Camp Company GmbH, whose Managing Director Meik Wagner promises: "We will work hard to ensure all users of a high-level European."

Reduced weekends in the name of cost containment - Secondly, Rotax has worked hard to meet the demands of a "spending review" of families and teams, reducing the duration of racing weekends to three days. Wedneday is deemed a "non-racing day"; should drivers registered for the race go on track they will be disqualified with immediate effect.

Limited Tires - Again to reduce costs, the sets of tires to be used during the weekend are limited to four.
MAX and DD2 with the new MOJOs – On the technical side, the development of components continues unabated. After a long test period, in fact, Rotax Vice President, Peter Oelsinger, announced that in the classes MAX and DD2 the new rubber compound, the D5 by MOJO will debut. The race "break-in", before its worldwide distribution, has been assigned to the following national series (in addition to the European Championship): BNL Karting Series, RMC Austria, RMC Belgium, RMC Germany, RMC Italy, RMC Netherlands and RMC Sweden .
All for 9 tickets - Like every year, Rotax is giving away invitations for the Rotax MAX Challenge Grand Finals (RMCGF). The tickets, a total of 9, go to the first three of Junior and Senior, to the first two of DD2 and the first of the Master. The top drivers of the European Championship will benefit with registration, the kart and engine, the set of tires, the petrol, and everything needed regarding tools and location.