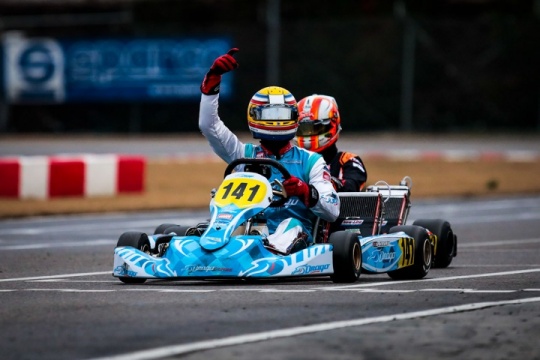 Author: Vroomkart International
Ben Hanley was the protagonist of an incredible weekend in Lonato during the Winter Cup.
Ben Hanley won the 23rd edition of the Winter Cup in the premier class, the KZ2. It was the Briton's fourth success at the historic Brescia event and thanks to his most recent win, he has moved one ahead of Marco Ardigò in the circuit's record books as its most successful racer, having shared three wins with Ardigò until now, that is.

In the post-race interview with Ben we joked, defining the Winter Cup a ... "Frozen Cup" because of the biting cold temperatures that characterized the entire weekend. The alternation between light drizzles and winds starting Saturday afternoon, a condition the Croc Promotion driver knows well, being typical of his native Manchester, seemed to have given Hanley that extra tenth of a second ensuring him his first success of the season.

Hanley was on top form throughout the weekend, except for the slip up during official practice where he clocked the 12th absolute time trial. From that moment on, however, he never gave up his 2nd position behind Leonardo Lorandi (Tony Kart / Vortex). The latter seemed faster, but a rocket-like departure by the Briton in the final allowed him to take the lead which he clung on to all the way to the checkered flag.

A thrilling fight it was - to the thousandth of a second - with Anthony Abbasse (Sodi / TM) who, immediately freed of Lorandi, was unable to punch a hole and squeeze his way to the lead, not even in the final stages when his times were significantly faster.

"From a competition point of view, it was an important test because we measured ourselves with all sorts of conditions; dry, wet and mixed," Hanley commented. "The key was to exploit our strengths. The first lap was really difficult with all the puddles that were there. Fundamental was not making mistakes and never leaving the clean  trajectory."

"It's a great feeling to have reached this goal. I thank Armando and the mechanics who made this result possible."