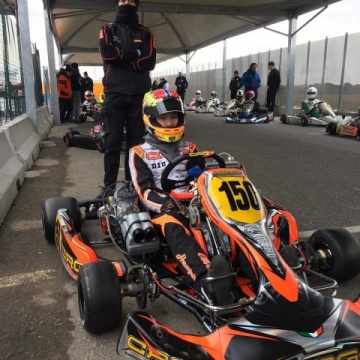 Author: Vroomkart International
Some words by Dennis Hauger about his first test with a KZ.
Dennis Hauger takes part in a two-day test in Lonato under the CRG banner with a Road Rebel KZ.

Hauger was one of the most successful drivers of the 2017 karting season, confirming the good things he accomplished in the past in Mini and Junior as well as in Senior with a victory in DKM and his 7th place in the CIK World Championship in what was his debut year. This "showcase" gave him a chance to enter the Red Bull Junior Team under the banner with which he will debut in British F4 with Arden.

We Vroom-ers met with him to find out about his first contact with the shifter, which he had never driven until now.

How was this return to karting?

"Beautiful, of course, but also strange because I'd been entirely focused on the single-seater in this last period. It's like being home once again."

Many pilots now in single-seater allow themselves a few days in karts, almost always in gearbox. Can we say that these tests help to refine one's driving style?

"I don't know, in the sense that obviously they are two different types of shifters on two different vehicles; this makes the comparison very difficult. The thing that I like is the reaction speed of the gearbox, feeling the revs go down and the engine brake that glues you to the seat."

Have you already fine-tuned the set-up?

"As you said, for me it was the first time with a KZ, so I have not touched anything much. I usually do not have standard changes. I like to adapt the vehicle to the grip of the day so I would often change even between one day and the next during race weekends. And then, Lonato is a track where many people run, so the conditions of the asphalt vary rapidly."