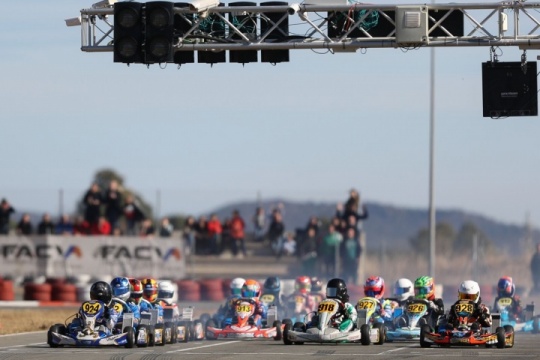 The newly rebranded IAME Euro Series kicked off the 2018 season at the International Kartodromo Lucas Guerrero in Chiva, in the Spanish region of Valencia. The race took place in mostly sunny but windy conditions with low temperatures. The event saw full support from the IAME engines factory as well as Tillotson Carburettors – the exclusive carburettor supplier from this year for the IAME direct drive categories – being present on track to assist the drivers.

Also in this event we saw the introduction of the Komet Cup, a 10-lap race giving the opportunity to the drivers who didn’t qualify for the final or the second chance heat, to compete on Sunday as well and show their speed, after four days’ efforts. A new high of 170 drivers entered the event in 4 categories, the highest ever in an RGMMC- organized Winter Cup. This made for 22 race heats on Saturday, followed by the second chance heats, and the newly introduced Komet Cup, before concluding with the Pre Finals and Final races.
X30 Mini
Santi Vallve was the fastest qualifier on Friday, ahead Sergio Ruiz Alvarez and Miguel Peiró Luzárraga. Peiró Luzárraga was the eventual poleman following Saturday’s heats however with two wins compared to Vallve’s one. Lucas Jack Fluxá Cross got the third place, coming up two places from his fifth place on Friday’s qualifying. In the prefinal, Fluxá showed great racecraft and after multiple positions swaps in the first half of the race, he managed to get the lead and hold on to it to the flag only 0.067” of Alejandro Melendez Pardi, putting himself on pole position for the final race. Peiró Luzárraga only managed third place, meaning he would be starting from the second row in the final race.Fluxá seemed perfectly positioned to win the event from pole position, getting straight to the lead at the start and continuing to lead most of the race, however Peiró Luzárraga drove a strategic race getting quickly the second place after the start and sticking right behind the leader, never dropping more than a tenth of a second behind him at the end of a lap. This put him in a position to grab the lead two laps from the end, and be the one crossing the line first. The podium was completed by Oliver Wright, who made a great recovery after being stuck in 10th position in qualifying and heats and even dropping a bit more to 13th on the Pre Final.
X30 Junior

p.p1 {margin: 0.0px 0.0px 0.0px 0.0px; font: 12.0px 'Helvetica Neue'; color: #454545} p.p2 {margin: 0.0px 0.0px 0.0px 0.0px; font: 12.0px 'Helvetica Neue'; color: #454545; min-height: 15.0px} p.p3 {margin: 0.0px 0.0px 0.0px 0.0px; font: 12.0px 'Helvetica Neue'; color: #454545; min-height: 14.0px} span.s1 {color: #e4af0a}
Following his amazing form in the free practices, local Mari Boya showed his intentions by easily scoring the first lap time, being the only driver to break the 57” barrier on Friday’s qualifying and outqualifying Robin Norma Amarin but no less than 0.3”. Alex Lloyd got a close third. Boya’s form continued on Saturday’s heats, getting three out of three, finishing Saturday ahead of Alex Lloyd who won two heats, and Georgi Dimitrov who won one and got two second places. Despite several position changes between Boya, Lloyd and Dimitrov, the order remained identical at the end of the Pre Final, with Boya again beating Lloyd, in defiance of Lloyd’s attack, who managed to get the lead for a lap and posted a slightly faster lap time. Dimitrov managed to get second place at the start but could make further progress and fell back to third where he eventually finished. Once again in the final, Boya easily took the start with Dimitrov managing to pass to second on the first lap and Lloyd in third. Quickly Lloyd retook second place, and a few laps later overtook Boya for a lap but couldn’t hold on to it. Ultimately Boya managed to pull a strong 2.5” lead and easily win the final following his dominant run all weekend, with Lloyd firmly second, but Dimitrov losing out in the closing stages to Cian Shields who completed the podium.
X30 Senior
The most contested category of the event, with an immense field of 87 drivers, held the Friday qualifying practice over three series. Despite the 40 minutes timespan between the start of the first series to the start of the third, there were no performance variations usually present due to the change of conditions, and the eventual results saw over 60 drivers split by less than a second’s lap time difference! In this intense qualifying practice Joseph Turney was fastest, ahead of Dean Macdonald and Rens Van Pelt. With the size of the field, Saturday’s qualifying result was decided in no less than 10 qualifying heats. Turney maintained his first place ahead of Macdonald scoring three wins and a second place, compared to Macdonald’s three wins and a third. Van Pelt however wasn’t able to hold on to third, falling back all the way to 21st, and handing his place to Mark Kimber who was able to score two wins, a second and a third place. Turney and Macdonald once again were first and second following the Pre Final, although Kimber did take the lead for several laps, but fell back to fifth. Clayton Ravenscroft on a mission came back from ninth to take fourth place and got promoted to third following Oliver
Clarke’s 5” penalty who dropped one position from third place on track to fourth. The final saw a fight between two pairs of teammates, Kimber and Macdonald taking the fight to Turney and Ravenscroft. The four drivers exchanged positions several times, with the lead going from Turney to Macdonald and eventually to Ravenscroft. Ravenscroft saw the chequered flag first with Macdonald second and Turney third, following a penalty however Turney was demoted to 10th, handing the last podium place to Kimber.
X30 Shifter
In the fastest category of the IAME range, local Carlos Leon was the fastest driver of the qualifying practice. Making the jump to this series Kevin Lüdi and Philipp Seewer were quick straight away scoring second and third. Despite his amazing speed during qualifying practice, Leon lost out in all three starts and had to fight back in the qualifying heats. Lüdi was quick to take the opportunity and show great speed of his own, winning two out of three heats on Saturday and finishing second once. Nicolas Rohrbasser despite finishing only second, fourth and third in the heats scored enough points to qualify second. Third was Seewer who, despite a series of issues in the first two heats dropping him twice to fifth, managed to jump ahead at the start of the third heat and win it, showing the real pace he had showed in qualifying practice as well. Once again in the Pre Final, Seewer made a great start jumping ahead of Lüdi who quickly lost another two positions and had to make his way back from fourth. Halfway through the race Rohrbasser made his attack on Seewer and took first place, while Lüdi managed to get back to third. The final saw a repeat battle between the three teammates, with Seewer once again making a great start and jumping in the lead for several laps, but Rohrbasser getting in front and winning the race, while Lüdi making his way back to third, and passing Seewer for second tried to catch up to the front but at the end running out of laps. Seewer settled for third, completing a podium for the three teammates.
Winter Cup Awards
The four winners Miguel Peiró Luzárraga, Mari Boya, Clayton Ravenscroft and Nicolas Rohrbasser will be awarded the full IAME Euro Series entry fees including the Thurday’s free practice fees, race slick tires and one litre of racing oil per race, while the remaining of the podium finishers receive one IAME Euro Series entry fees, including as well Thursday’s free practice, race slick tires and oil.
More innovations coming
Always looking to improve the service and communication with the teams and drivers, RGMMC has been working on a system for this year that will allow team managers to directly send message requests to race control about track
incidents. Stay tuned on the IAME Euro Series website news section (www.iameeuroseries.com) for more information, coming soon.