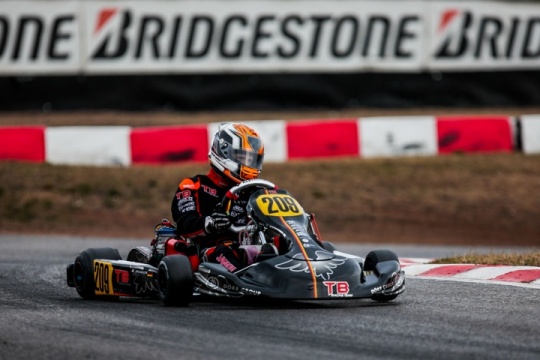 Author: Vroomkart International
Second victory in row for Janker, followed on podium by Nielsen and Hiltbrand.
p.p1 {margin: 0.0px 0.0px 0.0px 0.0px; line-height: 5.0px; font: 9.0px Verdana; color: #222222; -webkit-text-stroke: #222222} span.s1 {font-kerning: none}
Big show on Sunday for the drivers in the OK class. After a first part of the day that required the use of rain tires, the situation of the track gradually improved with some drivers opting to go out again on dry tires.

The start of the final, however, saw an initial exploit of Nicklas Nielsen (Tony Kart / Vortex) who took the lead up to well over half the race. While the Swede's ranks rose, Travisanutto's went down, passing 5 ° under the checkered flag but then relegated to 7 ° for a penalty.

What looked like was going to be a party for Nielsen, however, soon turned into Janker's celebration when Janker passed Nielsen on lap 15, after approaching dangerously during previous laps. Having passed in front, the standard bearer of TB guaranteed himself a margin that allowed him to manage the remainder of the race.

On the podium Janker and Nielsen were accompanied by an excellent Pedro Hiltbrand (CRG / TM) who, despite the few races experienced with the new chassis specification, has already shown he is "present" to the call for the positions that count in this karting season. 4th was Oliver Hodgson (BirelART / Parilla), followed by Marius Zug (KR / Parilla) and Noah Milell (Tony Kart / Vortex) who gained 17 positions from the start.