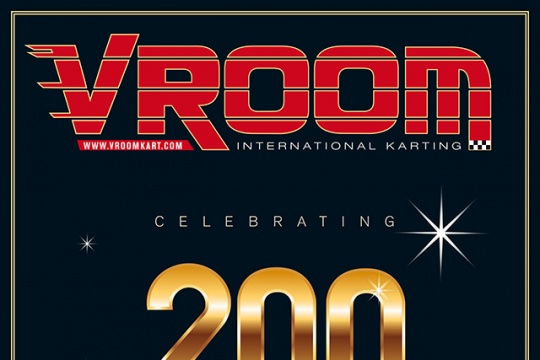 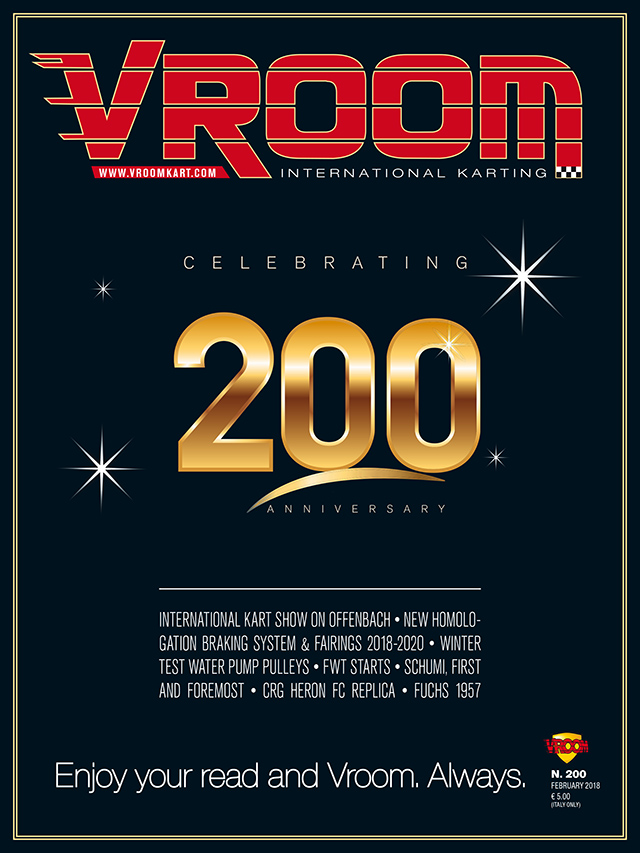 AVAILABLE ALSO IN DIGITAL IN ITUNES, APP STORE AND POCKETMAGS.COM

GREAT THINGS ON THE WAY
The 2018 season is ever closer to the starting line. The WSK in Adria and the Winter Cup in Lonato are soon to break the ice and unleash the forces fighting in the field to win the championship titles that are at stake. Who will be the top contenders aiming for the podium: the Continental title, for starters, followed by the Cik-FIA world championship?

Of course, making predictions in February my be a bit premature, pure guesswork, and the temperatures in February are not ideal. Especially, if were to consider the single brand categories. The OK, for one, now in its third year since its debut, needs to stand the test and be corroborated. Will it rise and be the focus of worldwide attention and worthily be the international breeding ground for budding racers?

The motorization much wanted by Cik vice-president Fia Kees Van de Grint has certainly met expectations in its technical aspects: it works and runs well. Nevertheless, it has yet to get into the good graces of the national movements, starting with Italy. There is still plenty of work to be done; more importantly, a need to rebuild the category’s political and therefore promotional credibility.

The prerequisites, however, now all seem to be in place and while we wait for the emergence of this engaging motorization sure to provide some spectacular competition, let us shift our gaze to the KZ karting class, the gearbox class that in the last two seasons has demonstrated the indubitable superiority of Paolo De Conto on Crg/Tm.

The question remains: who will be his rivals? CRG’s numero uno is still the favorite and the fight to winning his third consecutive championship title excites him even more.

De Conto, moreover, finds himself backed by the Crg team, by now a synonym for guaranteed results especially in this category: the numerous titles won in the gearbox 125 class, the last three in sequence, are definite proof of the team’s superiority. No less a certainty is the Tm engine that in the last two years has opened up an even more significant gap on the competition. The work of the Pesaro-based Factory directed by Claudio Flenghi has produced an exceptionally versatile power unit. Its peculiarity is its ability to provide max power regardless of weather condition thanks to the stability of its internal operating temperatures with no decrease in output, thus its performance, an indication of the quality of the work.

THE TRACK DOESN’T BETRAY ANYONE, BUT POLITICS?

While waiting for the show to start on the track, we are all a bit anxious to see if the people who took over the Cik presidency and the organizational and promotional management of Cik Fia Championships will be meeting expectations. Karting has experienced difficult moments in the past, but the outlook for the future is brighter and more optimistic. To promote and make the most formative and instructive of the four-wheel motorsport disciplines more engaging, it is necessary for those conducting the orchestra to bring out the best symphony. Discord can no longer be justified, and it is time that every effort be made to produce the best possible concert by working, indeed, in concert. The same old tune has been going on for too many years, and the karting world would like to sing and dance to a new song!

Vroom has always spoke against regulatory aberrations that compromise the appeal and promotion of karting among young people. A risk we can no longer afford nowadays especially as real and potential motorsport enthusiasts are increasingly bombarded by attractive and economically less demanding products, items or gadgets; in sim racing we have driving simulation. As exciting as these simulators may be, they can never replace the feeling a driver gets driving a kart down the straights, through a series of chicanes, fighting it out with rivals as equally ambitious to cross the line and finish first! From karts to formula cars that are real, a long shot made shorter in real vehicles. Of course reality is always different from the virtual; as far as we’re concerned, a driver who actually races in a real kart will undoubtedly be faster and more competitive than the sim racing champion - and not only physically.

That said, what we’d like to suggest to the people running the show is that today we can’t afford to underestimate the many alternatives on the market. For too long, we have been idly kidding ourselves that children under a certain age had no other choices, but the truth or the answer is to include whatever innovations are available, sim racing included, and to adapt and offer kids the chance to experience the world of real live karting in a manner that is satisfying, carefree – and gets their adrenaline really running a sweat!

After the closure of the Parma track, more bad news emerged at the end of January: the famous Kerpen track in Germany will be closed in 2020 to make room for a lignite mine. What came to mind was a 2001 event when a memorable page in the history of Cik-Fia karting competitions was written in Kerpen. Many will remember that on that occasion the focus of the mass media shifted to the German town where the fifth round of the FSA World Championship was being held; among the finalists: Michael Schumacher, the great F1 world champion. Thanks to his participation, karting benefited in a huge way by being in the spotlight worldwide as never before. We also remember that, besides world championship winner Tonio Liuzzi, there were also two “names”, then kart racers Nico Rosberg and Lewis Hamilton.

Could such a magical moment or event be repeated in the future? A few years ago a decision had been made to combine karting and F1 events on the same racing weekend. An ambitious project that, alas, has fallen to the wayside and been sadly forgotten. Helpful, of course, was the promoting of kart racing in the Nineties thanks to then Cik President, Ernest Buser, via Cik-Fia races being broadcast on Eurosport.

Today, obviously, it would serve as a priceless showcase. Because karting needs to be fostered, valued, shown and evaluated for the propedeutic role it plays and performs. Essential, too, is the need to develop and implement valid promotional strategies to give and increase visibility and credibility to a sector that, importantly but often overlooked by the powers-that-be, generates substantial revenues in industry and by turn employment opportunities, features often left unspoken. It is, in fact, not only an important training ground for anyone seeking a career in the automotive industry, the seedbed for able and ambitious young sprouts aiming to reach the pinnacle of motorsports. And then there are the many fans who live and experience racing for its pure and simple enjoyment as a weekend pastime, the Sunday kart driver.

Commercially speaking, these aspects all affect and determine the true business of the many companies in the field: the business of racing. On this subject, the responsibility of the ASN is to develop promotional policies, adopt and adapt regulations of the product to foster a less traumatic approach to the sport from an economic and a technical point of view. Though much remains to be done, answers are forthcoming, not least the advent - in Italy, too - of the Briggs Kart Championship, promoted by Crg, categories that are essential to bringing a broader audience closer to karting regardless of the performance of the vehicle. The important thing, in other words, is to be able to compete, race and have fun without having to spend a fortune, because it is karting core philosophy, lest we forget.

THE BEAUTY OF VROOM

Before we wave our flag and say goodbye, we would like to point out that in this issue of Vroom, like the last, you will find the latest news regarding homologations; after the chassis, we’ll be reporting on accessories: braking systems and fairings. You will also find a review, to also be continued in the next issue, of the innovations garnered at the Offenbach International Exhibition. And the first track tests with the collaboration of Officine in Progress. Now in its third year, the partnership between Vroom and OIP has allowed us to produce interesting, important and exclusive features and reports. The reports are detailed, technical, in-depth thanks to technology and the preparation of Andrea Saccucci, manager/engineer, so our readers, kartists, and anyone involved in the sector may find a resource that is engaging, challenging and captivating. An example: the 50-hour test with the Rotax Max, or Tm’s KZ10c we held under our X-Ray machine.

Although karts (and engines) are conceptually simple means from a technical standpoint, relatively speaking, Vroom has always given substantial space to technical articles, but after 30 years of publishing it was necessary to go into what is an interminable maze of technology with a new and different perspective and the partnership with OIP was providential. Telemetry and data analysis has increasingly become a branch of motorsports nobody today can do without ... Even in karting, thanks to technological innovations, improvements made towards achieving performance deemed unthinkable only a few years ago are now feasible, even possible – performance, that is, not exclusive to professional drivers - and Daniele Parravano, an OIP team member no longer the youngest of drivers is proof.

One last thing: any breaking or striking news you will find on our website: www.vroomkart.com, so do follow us on our Social platforms and enjoy your read: Vroom! 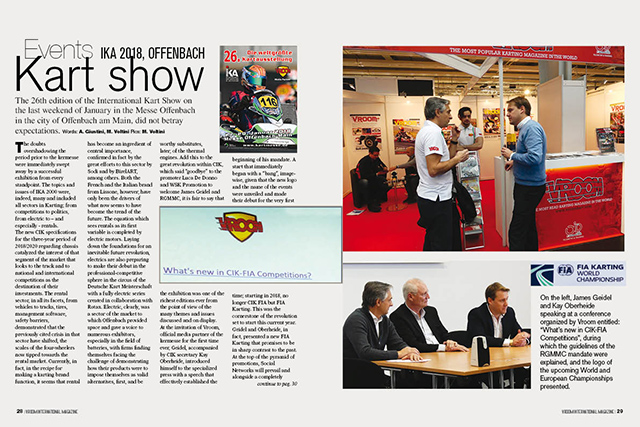