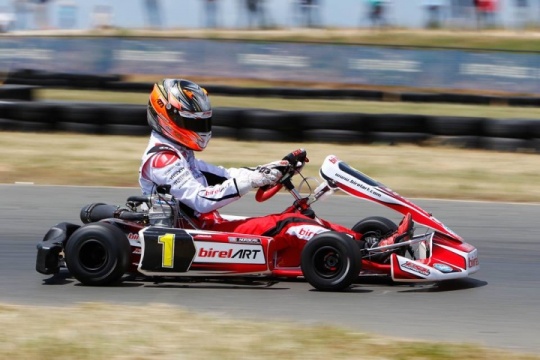 Press Release by: Birel ART
North American Birel ART Importer, PSL Karting, attended round 1 of the ROK Florida Winter Tour in West Palm Beach, FL, during the weekend of January 19th to the 21st.
As the newly formed series settles in, full fields in every class attacked the track with relatively close parity across all teams, making competition very exciting the the drivers and spectators. Birel ART, along with Canto Race and Prime Power Team put their joint efforts down to defend the Red Army on track all weekend long.

ROK Senior saw an all red front row with Ryan Norberg (P1) and Ryan MacDermid (P2) (Prime), followed up by some impressive wins in the heats from Norberg and top 5 finishes from McDermid who was up to P3 in the prefinal but some contact pushed him back to in the final P4. Norberg would take the win for the final, but not without controversial penalty pusing him back to finish P3.


In Junior, Thomas Nepveu would qualify P9 in another full field of the best Junior ROK drivers in America, but have no problem to back it up with P6 in Heat 1 and 3.  Nepveu, who never stops working to improve, would have a solid P4 finish in the 35 kart field.  In the main event, Nepveu would attack and make his way to second position, however contact with another driver would see him fall back to P9.  A notable mention goes to Prime Power Team's Ingrate Ayden who finished P4 in the 60cc cadet class.


ROK Shifter was another class completely dominated by the Red Army with the likes of Marijn Kremers and Robert Wickens (Prime) who would take turns swapping the front row positions all weekend long.  Wickens qualified P1 just edging out his Red Army team mate by 0.078th of a second (Apex Timing App).  Robert and Marijn demonstrated the strength of the CRY-30 chassis with two different driving styles and the ability of the karts to work on different compounds of tires across different series platforms.  In the final, Marijn would finish ahead of Robert for a 1-2 finish, however a penalty in the final, post-session, would move Robert to the top spot for the win.


Coy Arbour, Team Manager: "Competitors need to consider the versatility of a chassis on different tire compounds, and this weekend Birel ART drivers demonstrated the adaptability of the Birel's factory efforts to produce quality product suitable for all conditions."


Dominic Labrecque, President: "We had some pretty impressive qualifying and race efforts by our drivers, considering some of the pilots needed a day to transition to the harder compound Bridgestone, it was good to see a seamless transition for all.  Despite the penalties, we are still in a good position to secure ourselves a place in the Championship.