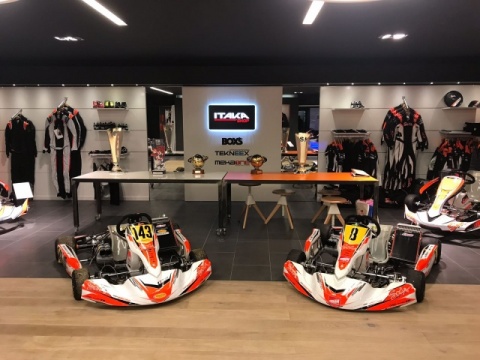 Author: Vroomkart International
The French manufacturer Sodikart has revealed its OK line up for 2018, things are getting serious for them!

Last year, after the WSK Super Master Series title win in Sarno, Mr. Pignolet said us that the OK would have been the focus of the 2018 season. Now they officialized the drivers for the next year: alongside Alex Irlando (who will compete only in CIK-FIA events), 2013 World Champion Tom Joyner and 2017 IAME International FInal winner Vincent Fraisse will form the new racing team in OK.

After five years with Dino Chiesa and a World Title in 2013 you moved to Sodikart. What are the reasons behind this change?

“I have had a great 5 years with Dino, under many different names and many different circumstances and together we have always been competitive. To win a world title was a dream, and I have been lucky enough to be competitive every year since. However during 2017 with the changing regulations & new generation of younger drivers I realised I needed a change & a new motivation as a driver. I would like to thanks the Chiesa Corse family for their support over the past years, and also wish them the best of luck in the future with their Kart Republic project. Sodi have always impressed me with their attitude to racing, they are a subtle team who bring in results every year in the KZ category. They also had some impressive outings during 2017 with Alex in their limited outings in OK. Their project excites me and I’m excited to get going.”

What do you expect from this season?

What’s you opinion about the new CIK-FIA President and the new promoter?

“I have no personal experience o racing in an RGMMC event but everyone has commented about their professionalism, plus competition in this sector can only be welcome to help produce the best organisation for an ever evolving CIK series. The WSK have done a great job over the past years and we must thanks them for their hard work.”

After the “spot” event in Bahrain now you finally have the chance to participate to all the season as official driver in OK class with Sodikart. How do you feel?

“I feel really happy to be in OK for the 2018 season. It’s a honour to drive for Sodi Kart and i will do my best to put sodi Kart on the top in this category.”

How much did your last win in Le Mans at the IAME International Final influence this decision?

“It’s not about this race, it’s for all the seasons that we do together, all the work and all the title during the last 5 years.”

Tom is a very experienced driver in single gear classes, while Alex comes from KZ, but he already proved to be fast with OK kart in Le Mans at the CIK-FIA Endurance Championship. How do you see your team? What are you goals for this season?

“We have a very compétitive team for the 2018. Tom and Alex are really fast and I’m sure we will be in front of the pack from the first race. Target is for sure to be on the highest position, and we will work to make it happens.”

From IAME engines to OK: how does the driving style change from one kind of engine to the other one?

“Between X30 and OK, the big differences are the front brakes and the weight, but I had experience in both categories. A go kart is a go kart, you have to drive it at the perfection, and this is valid for any category.”

You are also a coach driver: how important is this part of your job?

“Yes, I’m working in Morocco at Karting Agadir. I’m coaching different drivers from all around the world. It’s really nice when you passion turns into your work. We’re focus to put some of them in OK - OKJ in 2019.”

What do you expect from the new CIK-FIA President and the new promoter?

“It’s really nice to have a Formula One driver as a President of the CIK-FIA. He has to do his best to make karting more attractive especially for media. We need more attention in the newspaper or on TV, but I’m sure that it will change in the next years.”