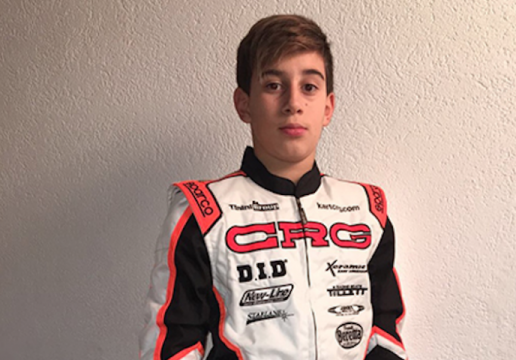 Press Release by: CRG Racing Team
The former F1 driver Jarno Trulli chose the CRG official team for his son’s first season in OK- Junior
CRG is pleased to announce the agreement with Enzo Trulli, son of the former F1 driver Jarno, that was one of the strongest F1 Italian drivers in the 90’ and 2000, with 256 GP raced with the teams Minardi, Prost, Jordan, Renault, Toyota and Lotus, taking a victory in Montecarlo and 4 pole positions.

Enzo Trulli, born in 2005, will be official driver in the CRG racing team in the OK Junior category in 2018, making his first season in international karting and taking part to the CIK-FIA races (European and World Championships).

After gaining experience in the 60 Mini class, where Jarno himself followed him in the WSK national races, Rok and in the Italian Championship, the 2018 will represent a new challenge for Enzo in his growth process: start working with a top team, one of the most awarded and professional ones in international karting and that helped in the formation of many of today’s professional drivers.

Enzo’s program will include, besides the European Championship (4 rounds) and the World Championship in Sweden at the end of September, also the main WSK races, the Winter Cup, the DKM and the most important Trophies.

In these days Enzo Trulli made the first tests with the CRG colours on the Lonato track, with positive timings and good feelings, as he states: “I had an excellent driving sensation during the first days of test with the CRG chassis, both for stability and handling, and for performances, that were good even if the goal was just getting acquainted with some set ups. I also felt well with the team and the personnel, I am sure I can learn a lot and get soon good results.”

Enzo’s debut will in February with the 1st round of the WSK Master.