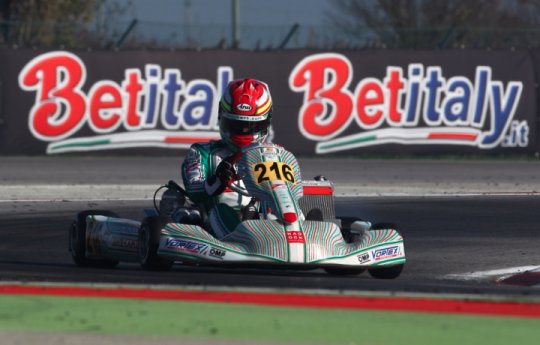 Press Release by: Tony Kart Racing Team
Two formidable podiums, in Mini and OK categories, with Antonelli and Vidales, close the WSK Final Cup. In OK class Nielsen (KSM Schumacher Racing Team) gains both victory and title. There is also the regret for the accidents of Viganò (KZ2) and Gustafsson (OKJ), who missed an important opportunity.
MINI. Antonelli, after signing the second chrono time in the qualifying, performed the long sequence of heats always obtaining one of the three first positions. In A prefinal Andrea missed the podium for a hair’s breadth and in the final, after a hard fight, crossed the finish line in the second position.
The scores gained allowed Andrea to obtain the place of honour in the final ranking of the Final Cup, too.

OK. Our driver, David Vidales, won a heat and took the second position in A prefinal and the best lap (48.444).
Nielsen won the final (Tony Kart-Vortex. KSM Schumacher Racing Team), with the best result winning both race and title.
Once more, David got on the third step of the podium thus confirming the placement in the general WSK Final Cup’s ranking.

KZ2. In prefinal, Matteo Viganò won, confirming to be one of the favourite drivers for the final success. The first stage of the final was carried out straight with our diver gaining a gap, after a short initial fight with Benavides.
On 18th lap, the worst end came as a result of the fight for the success between our driver Matteo and Lorandi, him also at the wheel of a Tony Kart (Team Baby Race Academy).
After a first, thrilling, exchange of positions, once Matteo was at the lead, he had a collision which put him off the race.

OKJ. In the cadet class, Viktor Gustafsson was just back from the good victory of the first round and had good chances to succeed in the final, after having run very virtuous heats.
In B prefinal, while fighting for the third position, Viktor was involved in a multiple collision who stopped and forced him to withdraw from the final, thus losing the opportunity to win the Final Cup.