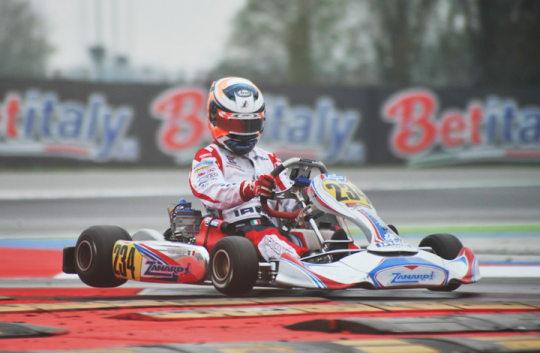 Press Release by: WSK
Before the second round of Adria, on schedule from 9th to 12th November, the leaders of the standings of the WSK Final Cup are Travisanutto (I – Zanardi-Parilla OK), Gustafsson (S – Tony-Vortex OKJ), Lorandi (I – Tony-Vortex KZ2) and Bedrin (RUS – Tony-TM 60 Mini).
The race to conquer the WSK Final Cup.

After last weekend’s races at the Adria Karting Raceway, let’s have a look at the WSK Final Cup standings. Each stage of the event, where drivers can score points since the qualifying heats, showed that there are several drivers who can aim at victory in all the four categories. Everything can happen at the circuit of Adria (I) next weekend, which is going to be decisive also because of the progressive scoring system: this is a further reason to follow the live streaming on Sunday 12th, which will cover the whole racing day.

Travisanutto leads in the OK.

Lorenzo Travisanutto (Zanardi-Parilla-Bridgestone) dominated qualifying in OK, winning both the races. The Polish Karol Basz (Kosmic-Vortex) and the Danish Nicklas Nielsen (Tony Kart-Vortex) challenged the Italian driver winning the Prefinals. Travisanutto reacted in the Final, where he won on wet track and grabbed the leadership with 80 pts. Nielsen, the runner-up of the Final, is behind Travisanutto also in the current standings with 68 pts. Behind them the Spanish David Vidales (Tony-Vortex), who gathered 47 pts also thanks to the 3rd place scored in the Final. Basz is fourth with 43 pts.

Gustafsson is at the top in the OKJ.

The Russian Kirill Smal (Energy-TM-Vega) was the leader after the OKJ heats, but he was rather unlucky in the decisive stage. It was then that the two British drivers, Dexter Patterson and Jonny Edgar (both on Exprit-TM), took over the leadership winning the two Pre-finals. Then in the Final, it was the turn of the Swedish Viktor Gustafsson (Tony Kart-Vortex) to take the lead after a recovery from the 6th row. Gustafsson leads with 56 pts, 3 points ahead of Edgar. Third position, after a tough battle for the victory in the Final, for the Russian Alexey Brizhan (Tony Kart-Vortex) with 43 pts, ahead of the Italian Luigi Coluccio (BirelArt-TM) – 32 pts.

Lorandi is the driver to beat in KZ2.

Alessio Lorandi (TonyKart-TM-Bridgestone) won the qualifying, the Prefinal and the Final. Now the Italian driver leads the KZ2 with 90 pts, the maximum. Second position with 49 pts for, Francesco Iacovacci (Luxor-LKE), always behind Lorandi except for the Final, where he finished behind the Rumanian Daniel Vasile (DR-Modena). The latter is 3rd with 37 pts, ahead of the Italian Alessandro Giardelli (CRG-TM) – 24 pts.

Bedrin wins in the 60 Mini.

The victory in the Final allowed the Russian Nikita Bedrin (Tony Kart-TM-Vega) to take over the leadership from the Norwegian Martinius Stenshorne (Parolin-TM): they won their Prefinals and they now occupy the first two positions in the standings with 83 and 55 pts. The 2nd place in the Final brought the Russian Ruslan Fomin (Tony Kart-TM) to the 3rd position with 41 pts. Fourth place for the Italian Alessandro Cenedese (Parolin-TM) – 29 pts.