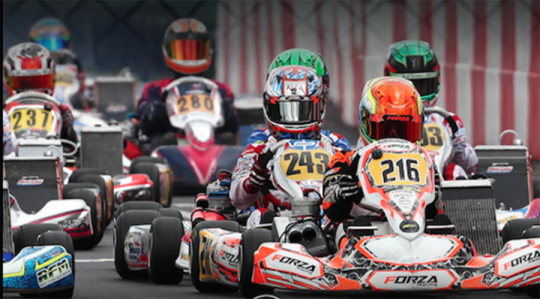 Press Release by: WSK
Over 200 entrants to the WSK Final Cup, the final challenge which – with its double event on 5th and 12th November – marks the end of the WSK Promotion’s 2017 season. International teams and drivers are eager to challenge each other at the Adria Karting Raceway in the four categories admitted to the race: 60 Mini, OK Junior, OK and KZ2.
A double, great grand finale for the WSK in Adria.

The karting season is approaching its final act: the international titles have been awarded after a calendar full of events, and the Adria Karting Raceway is – once again – the ideal venue for a last, challenging event for all the protagonists of this 2017 season. The event is the WSK Final Cup, which become this year a double weekend with two rounds in schedule on 5th and 12th November.

Over 200 drivers from 5 continents among the entrants.

The list of entrants says it all: 203 drivers coming from 5 Continents divided into the 4 categories KZ2, OK, OK Junior and 60 Mini. They are all ready to undergo scrutineering on Thursday 2nd November. Impressive figures for the OK Junior and the 60 Mini with 74 and 75 drivers respectively and, among them, lots of the top drivers of the 2017 season.

Champions on track in Adria.

At the top of the list of the 60 Mini we find the protagonists of the 2017 WSK Super Master Series: the Russian Nikita Bedrin (Tony Kart-TM-Vega), the Italian Andrea Antonelli (Tony Kart-Vortex) and Alfio Spina (CRG-TM). Big names in the OK Junior, too, with the new CIK-FIA World Champion, the English Dexter Patterson, and his fellow countryman, the European Champion Jonny Edgar (both on Exprit-Vortex-Vega). In the OK, too, we have an outstanding list of big names coming directly from the World and European Championships of the category: the Spanish David Vidales and the Russian Pavel Bulantsev (both on Tony Kart-Vortex-Bridgestone) and, moreover, the Italian Andrea Rosso (CRG-Parilla), who has already moved to the  category after winning this year’s WSK Super Master Series. Among the drivers of the KZ2, eyes on the young Italian Alessandro Giardelli (CRG-TM-Bridgestone).

The double event in Adria.

The final standings of the WSK Final Cup will be established by the results of the two racing weekends: points will be awarded after the end of the heats, and after the Prefinals and the Finals. There is an incremental scoring system which awards a growing amount of points in the two weekends of 5th and 12th November for an overall number of six occasions where to gather points for the final standings.

The races in Adria live in streaming on Sunday 5th November.

The usual appointment on video is guaranteed from Adria by the live streaming provided by WSK Promotion on Sunday 5th November. The whole final phase of the event will be available on the official website www.wsk.its. The streaming starts at 10:30 with the Prefinals, then it continues with the Finals in the afternoon.