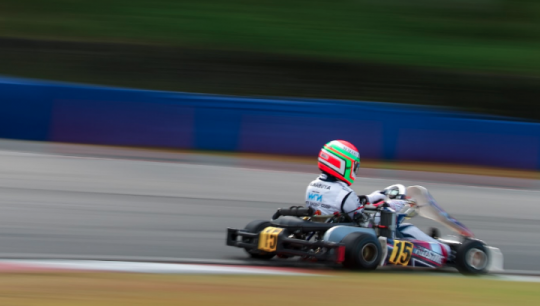 Author: Vroomkart International
The Annual Rotax Max Festival Japan was held on October 7th & 8th at Mizunami Circuit. A total of 226 participants from the whole Japan as well as International drivers gathered for this final show time. With points generated from this race plus points from the Rotax Max series throughout Japan, winners will have their Grand Finals Tickets attributed.
Darrell Smith from BRP-Rotax was also present to provide technical assistance with the organization. This 2 days event was extremely challenging for pilots and mechanics with wet and dry conditions, and several heats where any mistakes can cost dearly, and maybe a ticket for the Grand Finals...

The 16 little youngsters went on 2 Qualifying heats. The first heat was won by Rintaro Sato, Ryota Horachi 2nd and Ryo Sakai 3rd. The second heat was won by Shota Fujii, Ryota Horachi 2nd and Rintaro Sato 3rd. All drivers finished within 4 seconds in these 2 heats thanks to the raffle system, all competitors benefited with a fair and reliable engine.
In Prefinal, the battle was fierce. Overtakings at every corners for the command, it was impossible to predict who would finish first as all drivers are packed and lined up in every lap. Ryota Horachi won the prefinal with Shota fujii in 2nd place and Kishi Fuji 3rd.
At the final race, Ryota Horachi made the hole shot with Kishi Fuji close behind. At turn 5, Hayato Iida went for big gap left by Kishi to grab 2nd. Ryota and Hayato started to pull away. Rintatro Sato with his aggressive driving style inherited from his father Takuma Sato, the Indy 500 winner this year, is trying deperately to get rid of Kishi. After several attempts, he passed Kishi, and paced up to join the lead. Kishi was soon to be passed by Shota. The front pack started to grow with all 5 drivers lined up with 1 second gap and ready to battle. Ryota and Rintaro made constant swapping for the lead, Hayato, Shota and Kishi lurking in the back, ready to profit from any mistakes.
With 4 laps to go, Ryota and Rintaro stopped any attacks, pulling further away for a final mano a mano. Rintaro took the lead on the final lap, but made a slight mistake on the left haripin leaving a wide gap for his opponent to get in. with 3 corners to go, Rintaro tried to pass from the inside and outside, but Ryota was still in the command. The last attempt with be at the long straight, Rintaro slipstreamed and plunged neck and neck with Ryota. The photo finish revealed Ryota winning by 0.052s. Ryota Horachi is the winner, Rintaro Sato 2nd and 3rd place for Shota Fujii. Having secured enough points in the Rotax series championship, Ryota and Shota won their tickets for the Grand Finals, 2 year in a row for both of them.

With 7 drivers on the line up, Daisuke Yamashita has been the strongest, from time trials to heat 1 & 2, finishing first every time. His opponent, Ryota Horachi, double entrant is the only who can challenge him.
For the prefinal, Daisuke again led from start to finish, outrageously leaving others far behind. Ryota Horachi was cruising on 2nd place, without forcing, and well aware that the title of champion is at the final. on final lap, Akihito Kawase then 3rd made mistake allowing Hitoshi Sakai to nab that position. Just behind, Masaki Kuriyama also tried to slip through but clipped Akihito, and both went to a halt, Masaki's front over the rear of Akihito.
For the final race, Daisuke and Ryota both compose the front grid. From the start, Ryota made the hole shot from the outside lane to quickly pull away. Daisuke got surprised by the move and got stuck in the traffic. Not willing to give up, he cleared his path by overtaking each opponent and paced up. He was soon to join the leader. Daisuke and Ryota started their dual from lap 3. With ongoing battle, Masaki quickly gathered and soon to have the rest of the pack forming a line. Ryota tried a move at the hairpin on final lap, overtook Daisuke, but wasn't carrying enough speed to completely pass. Daisuke crosses the finish line first, Ryota 2nd and Masaki 3rd.
Daisuke Yamashita is the winner of the Rotax series and won his ticket for the Grand finals in Mini Max class.

The Max Novice is the only category that doesn't have Grand Finals ticket attribution, but nonetheless, winning at the Max Festival gives a certain prestige and fame. With a full grid of 34 drivers, Heat 1 was ran on a partially drying track, but the organization imposed rain tires for this race. Nobuaki Tomita won the first heat with Tatsuo Akiyama 2nd and Yoshinao Adachi 3rd. The 2nd Heat was ran on a completely dried track allowing drivers to use slick tires. Yoshinao swapped places to take the win over Nobuaki 2nd and Tastuo 3rd. In Prefinal, a big suprise awaits the 3 protagonists. Masahiro Nikaido, who qualified 24th in the rain made a huge come back, gaining 2 positions on Heat 1, and whooping 13 positions on heat 2. Starting 9th, he overtook 5 drivers in 3 laps. Halfway through, Masahiro was behind the leader. Yoshinao finally cracked and Masahiro won the prefinal race. At the final race, Masahiro Nikaido started from pole position with Adachi Yoshinao along side. Masahiro made to the hole shot and pulled away very quickly. Yoshinao, losing a bit of pace, got passed by Nobuaki for 2nd. Battle mode was engaged with Yoshinao and Nobuaki, allowing Masahiro Nikaido to create very safe gap of 3 seconds. Yoshinao somehow managed to outpace Nobuaki and secured P2. Meanwhile in the back, 6 contenders were at battle to get final place on the podium. With places remaining unchanged till the end of the race for Masahiro Nikaido P1 and P2 for Yoshinao Adachi, the 3rd place has been taken by Kazuki Hayakawa.

44 drivers Junior drivers have been separated into 2 groups for time trails, and 4 groups for the qualifying heat. 34 drivers composed the grid for the final, while the remain 10 drivers eliminated went on for the the little final, the NGK Cup.

With 10 drivers for this 13 laps small final, the consolation price was still up for grab. Hitoshi Sakai finished first Ryushi Honda 2nd, Rihito Inaba 3rd. Due to aggressive manoeuvre and pushings, the judges and the race direction had a very long debate to give the final result. Rihito Inaba has been declared winner post race, Chou Yan Chen 2nd and Haruta Chikamune completes the NGK Cup Podium.


Tosei Moriyama and Toranosuke Hamada compose the front row, Yuta fujiwara and Sena Shirakawa the 2nd row, Itsuki Watanabe and Kento Omiya for the 3rd row. Among those 6 drivers, 4 of them have the highest scores in the Junior series and are fighting for the 2 Grand finals Ticket allocated for the Junior champion, and 2nd place. The Start was perfect without incidents, and Tosei took a comfortable lead, with Yuta and Toranosuke close behind. Sena 5th and Kento 6th, are both aware the grand finals tickets are a few positions ahead. After a few laps, Tosei, Toranosuke, Yuta and Sena outpace the rest, while Kento was under Kotaro Shinabara's attack.
Halfway through the race, Tosei and Toranosuke stopped fighting, the tickets for both of them were at stake. In the back, Kento tried desperately to come back, but he had to pass Yuta for P3, but all of them were already too far. Tosei took the win, Toranosuke 2nd, Yuta 3rd. Tosei Moriyama and Toranosuke Hamada both obtained their Grand Finals ticket for Portimao.

68 Gentlemen competed for Max Masters class, half of them qualified, while the 2nd half took part in the little final, the Mojo Cup.

For this little final, Tadashi Toyama, a disabled driver took the pole with Katsuyuki Tanaka 2nd. Again the little final is prone to a lot of incidents A handful of drivers got penalized in this final for various reasons. The race was eventually won by Yutaka Sato, Yoshimi Inoue finished 2nd and Hiroaki Kozawa 3rd.

Makoto Kubota, multiple time Rotax Grand Finalist took the pole, and Masanori Kato qualified 2nd, Tomokazu Kawase and Kengo Sugiyama 3rd and 4th respectively.
Makoto took the lead from the start, and Tomokazu camped on the inside line to grab 2nd, Masanori 3rd. Katsuyuki Sasaki quickly slipped through the tiny space for 4th leaving Kengo 5th. For 2/3 of the race, none of those protagonists made any attack, the positions remain unchanged. The only noticeable part is the top 3 drivers pulling away with a 3 seconds gap. 5 laps to go, Kengo made a pass on Katsuyuki, taking 4th. With 2 laps to go, the show really starts. Tomokazu took the lead at the end of the long straight, but Makoto regained his position back 2 turns later. Tomokazu went back to retake the lead soon after. On the Final lap Makoto repeated Tomokazu's attack after the straight. At the hairpin, Tomokazu made a hard braking, took the lead, but lost his momentum on the exit. He soon had to defend against Masanori who watched the whole ordeal from the back and ready to take any opportunities. Makoto cruised to Victory, Tomokazu 2nd, managed to contain Masanori, who finished 3rd.
The Grand Finalists for DD2 Masters this year are Tomokazu Kawase, Kengo Sugiyama, Masanori Kato, and Yuji Sato.

55 drivers took part for the Senior Max category. The top 34 drivers had been granted access to the final, and the rest went on for the little final, the XPS Cup.

Ryo Sasaki is on pole with Futa Kojima P2. Akito Itsuki and Asuka Muroi are on the 2nd row. At the start, an incident happened on turn 2. Asuka had been taken out by a driver trying to overtake from the outside line, causing a chain reaction and dragging with him one more driver. Meanwhile, Ryo lost his lead to Futa and Akito stayed 3rd. Those position will remain unchanged for a while. with 2 laps to go, Akito made a pass on Ryo, who dropped 3rd. Soon after, Kyokichi Furue also made an attack on Ryo, sending him swinging left and right without losing control. Futa took the win, Akito 2nd and Kyokichi 3rd.

The 2 team mates from Haruna Kart Club Akinori Kikuchi and Ryosuke Matsuzawa monopolized the front grid for this final. Koki Mizuno and Daisuke Takaguchi are on the 2nd row. The start was given, and Ryosuke made the hole shot front the outside line, Daisuke followed the same line to grab 2nd Akinori 3rd. Kazusa Nishio, who started from 6th started to whoever was in front of him. By the end of the first lap, he went from P6 to P2. On lap 2, Kazusa took the command. in the following lap, Ryosuke made a attack back on Kazusa, they both went wide, Kikuchi went for the gap and being the new leader. Ryosuke starts to drop 5th, overtaken by Koki, Kazusa and Ren Tomita. With 13 laps to Koki got very close to Akinori and performed an attack. New leader. 8 laps to go, Ryosuke gained 1 position, now 5th. Daisuke passed Kazusa for 3rd. Ryosuke gradually regain his positions back by passing Kazusa for P4. With 4 remaining laps, Koki had built up a comfortable gap in the lead, Akinori started to lose some pace and got overtaken by Daisuke, Ryosuke also got through, followed by Kazusa. The infernal spiral continued with Akinori's chain breaking. His 3rd Grand Finals dream was over. On Final lap, Had a final exchange, Daisuke on the defensive, contain every attack made by Ryosuke to secure 2nd. Koki Mizuno for the win, Daisuke Takaguchi 2nd, Ryosuke Matsuzawa 3rd. Koki Mizuno and Ryosuke Matsuzawa had both obtained sufficient points to secure their tickets for the Grand Finals in Senior Category.