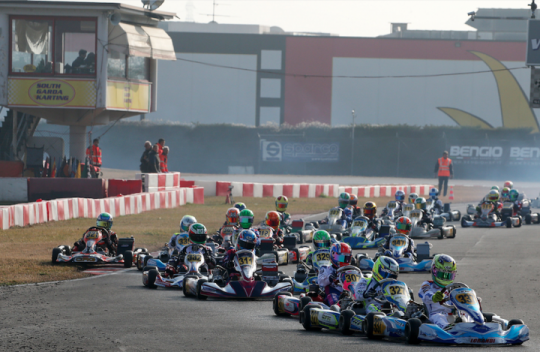 Press Release by: DKM
Big season finale on the South Garda Circuit.
Next weekend the last decisions regarding the German Kart Championship are going to be made. The highest German kart racing series with its four grade series is going to take place on the South Garda Circuit in Italy for the first time. The response is overwhelming: With 187 participants from more than 20 nations all classes are filled up to the last place.

After four exciting races in Ampfing, Kerpen and twice in Wackersdorf the DKM is now going to travel to Italy for the first time – the last championship points are going to be dealt out in Lonato. The season could hardly have been any more exciting, the fight for the title is still open in all four classes. The season finale is also going to be a highlight apart from the championship decisions though. The participants’ interest in the DKM premiere on the South Garda Circuit is impressive. All four classes DKM, DJKM, DSKM and DSKC are completely filled up and there even had to be waiting lists.

The location for the last ranked races of the year couldn’t be any more historical. The then 1000m long track close to the Lake Garda was opened in 1988 and has been the central point of international kart racing since then. All big events have already taken place in Lonato. Two years ago the track was extended to 1200m and is going to be the venue of a European Kart Championship again next year.

Another premiere is going to take place in Lonato. There is going to be a live preview show for the first time on Friday evening at 7pm. The DKM presenters Jenny Wade and René Köhler are going to present the South Garda Circuit to the viewers at home, are going to show the title favorites and talk about the DKM 2018 with DKM-series coordinator Stefan Wagner. Additionally the DKM fans can look forward to the usual live-program. From qualifying on Saturday morning to the presentation ceremony on Sunday evening, more than 15 hours of live images await on www.kart-dm.de. The program is going to be completed by a DKM-highlight magazine on November 5th 2017 at 1:10pm on the German automobile-, engine- and motorsports-channel MOTORVISION.TV.

All title decisions are yet to be made

There is still excitement in the individual championships. All titles haven’t been won yet before the finale in all four classes. Things seem most clear in the German Kart Championship. Reigning junior champion Dennis Hauger (CRG Holland) is the leading driver with an advance of 48 points. Considering the void results, his only pursuer David Schumacher (KSM Schumacher Racing Team) still has realistic chances of winning the title though.

Two brothers, Jorrit and Stan Pex (both CRG Holland) are fighting a duel for the title at the German Shifterkart Championship. While it would be the sixth success for Jorrit, his younger brother Stan would stand on top of the podium for the first time. The two Dutchmen are 34 points apart before the finale in Lonato.
The drivers of the two other grade series are considerably closer together. At the juniors, there is only one point separating the leading driver Kas Haverkort (CRG Keijzer Racing) from the Netherlands and the German Hugo Sasse (CRG TB RacingTeam). Both drivers are confident before the finale. “The racing weekend in Wackersdorf went perfectly for me, I won both races and took the lead in the championship”, Haverkort says contently. Sasse travels to Italy in the best mood as well though: “Even though I didn’t win in Wackersdorf, I was able to gain important points and stayed close to the top.”

At the DMSB Shifterkart Cup four title favorites are going to start: Germans Julian Müller (Mach1 Motorsport) and Lucas Speck, David Detmers (MSR Motorsport/WST-Power) from Austria and German Alessio Curto. There are only nine points between leading driver Müller and third driver Detmers. Curto on fourth place still has chances of winning the title with a backlog of 34 points as well. Overall leading driver Julian Müller is starting into the races contently, despite the pressure by his pursuers: “I managed to celebrate a double victory on Sunday after a difficult Saturday in Wackersdorf. That gives me a lot of confidence for the championship fight.”

Prominent guest starters at the finale