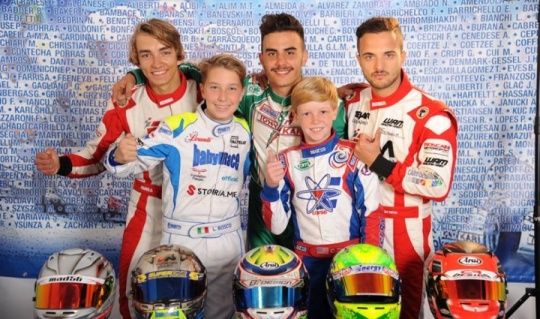 For the second year in a row, the Mini class went sub-judice: Karol Pasiewicz wins the race, but he doen’t step on the podium because marshals find his fron bumper in incorrect position.

After the green light the polemean Paolo Gallo misses the start and gets involved in a crash with other drivers, Brando Badoer included, and slips in the back of the field. Russia’s Nikita Bedrin thanks and shows the way from the top spot followed by Alfio Spina. The driver from Sicily is slower than his rivals Karol Pasiewicz and Connor Zilisch, and both of them get the better of the Italian and close the gap with the leader.

During the final part of the race, the three drivers entertain the crowd with some spectacular moves and they arrive side-by-side at the last turn where Pasiewicz has a little advantage and takes the win over Zilisch and Bedrin.

Before the podium procedure the winner’s front bumper is dislodged and he gets a 5 seconds penalty that costs him the win and the podium! Zilisch finishes in first position ahead of Bedrin and Filippo Croccolino.

No doubts: after 4 wins out of 5 heats disputed, Luca Bosco takes home also the final race. The Baby Race driver leads from lights to flag and gets the better of Leonardo Caglioni and Francesco Sabella who round out the podium.

Bartosz Mila recovers from grid 4th and duels with his fellow countryman Kacper Szczure to get the head of the race. Under the chequered flag the BM Karting driver has eight tenths of second over his runner up. Italian Danny Carenini finishes in third position.

Poleman Mattia D’Abramo doesn’t betray expectations: first from the green light to the chequered flag, leaving his rivals unarmed thanks to an incredible pace. Vittorio Russo tries to put some pressure on the leader, but in the second part of the race the latter pulls away and Russo has to settle for second ahead of Giuseppe Gaglianò.

Italians dominate the Shifter class with ten drivers in the first ten positions after the chequered flag. Polesitter Danilo Albanese shows the way from the top from the start to the end. The fight is open for the other two podium places with Nicola Marcon who closes in second position with one second of gap from the winner. Federico Squaranti gets the better of Christopher Zani after a fierce duel and takes the last podium position.

The super guest Rubens Barrichello finishes his race due to a contact with Jacopo Guidetti, who then is penalized.