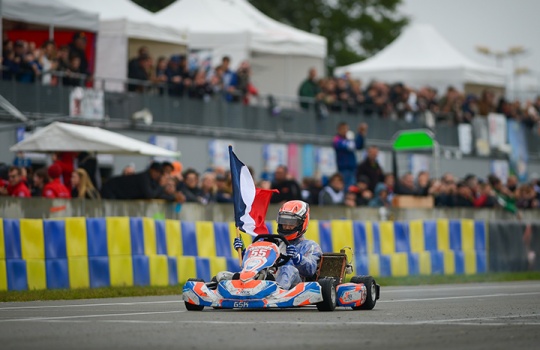 Author: Vroomkart International
It’s Sodikart VS CRG again, but on French soil the private team Rouen GSK 1 grabs win by just 48 seconds!
The second edition of the CIK-FIA Endurance Championship at Le Mans, the 32nd edition of the 24-Hour Karting, is an amazing spot for OK engines and the win by a private team confirms the accessibility of this important and traditional competition. The CIK-FIA Endurance Championship is the only high-level Competition to offer amateur drivers with very reasonable budgets, a chance to challenge and beat the stars of today's karting.

The 33 teams, 11 of which in GP1 class with OK engines, start on Saturday at 3.00p.m. after the drivers’ presentation. CIK-FIA Vice President Kees Van De Grint lowers the flag to start the race and the first half takes place in dry conditions, then rain appears during the night making drivers and teams mount their set of wet tyres up to the chequered flag.

The two factory teams fight for the lead over the first five hours, then the team CMCR Charente MMA (Tony Kart-Vortex) takes the lead until evening, when the team Rouen GSK 1 (Sodikart-Vortex) jumps on top spot. During the night, the rain creates a few problems to the teams, especially the ones with little experience. Early in the morning, CRG and Rouen GSK1 fight for the lead while Sodikart team is 10th because of technical and sporting issues.

For more than eight hours, the gap varies from two laps to a few seconds depending on the ups and downs that affect the two contenders. Faster, CRG Racing Team bets on slick tyres with more than one hour to go, but the rain appears once again and forces the Orange-Black team to another pit-stop. CRG tries to close the gap, but when the chequered flag comes out 48 seconds separate them. In the meanwhile, Sodikart finds his way to the top from the 10th and takes home an important podium.

The category GP2, whose event counts for the award of the Coupe de France GP2 at the end of the season, is the stage for 22 crews that fight neck to neck for 24 hours with their Rotax Max. A team dominates the race from start to finish. The team FJF Performance (Sodi-Rotax) never left the first place before finishing 8th overall with 1358 laps. Behind the winner follows Belinois Jac Kart (Sodi-Rotax) team and finishes ahead the #75 Paris KMD (Sodi-Rotax) that gets the better of Cormeilles KMD (Sodi-Rotax).