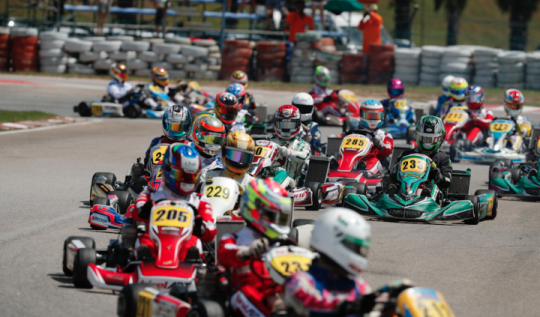 Press Release by: X30 Southeast Asia
After 5 rounds at 3 different circuits throughout Southeast Asia, the X30 SEA series returned once again to the fast and flowing Sepang International Kart Circuit in Malaysia – the perfect location for an explosive finish to the championship.
The weekend was marked by typical Malaysian weather, alternating between blistering heat and pummelling rain. Teams and engineers were left scrambling to find the right setups for the simultaneously wet and dry weekend – Many would try, but not all would succeed.

Adding to the challenge was the largest grid the championship had ever seen – 95 drivers from 10 different countries took their positions on the grid. Malaysia, Singapore, Indonesia, Thailand, Philippines, China, Taiwan, Hong Kong, Japan and Sri Lanka were all represented on track.

The cadet category doubled down on its usual share of racing action. 20 young drivers displayed tremendous pace and race-craft, driving spectators to the edge of their seats.

It turned out to be an eventual dream weekend for Sergio Noor (RISER ShaDaff Motorsport). The Indonesian began the weekend with a lacklustre performance, qualifying mid-pack in 12th position. It was a tough climb back to the top among the highly competitive grid, but with four races to go, Sergio Noor proved he had what it took to bring home the title of Round 6 Champion.

In the Heats and Pre-Final, Sergio fended off attacks from the rest of the grid to finish in ever-improving 9th, 6th, and 4th placings respectively, putting him within arms’ reach of a 1st placed podium finish.

The next three laps witnessed incredible racing as Sergio drafted behind the race leader between corners, finally executing a perfectly timed late braking manoeuvre on the inside of Turn 1, snatching a small lead from Tiziano Monza.

But Tiziano, one of the youngest drivers in the Cadet category, was not giving up his position without a fight. Both karts negotiated the next four corners side-by-side, until the older Indonesian eventually emerged ahead of the Kosmic.

From there, there was no stopping Sergio Noor as he put on a blistering drive to the grow his lead in the remaining 7 laps, hammering home his victory with an extensive 3.148s gap.

Coming in 2nd and 3rd were Tiziano Monza and Yevan David from Singapore, followed by Tasanapol Inthraphuvasak from Thailand in 4th, and Christian Ho from Singapore in 5th.

The first lap of the Junior category final saw the swapping of positions between pole sitter Putera Adam and second placed starter Amer Harris Jefry (both of I.S Racing – CRG). The two leaders would hold their positions for the next 16 laps of the 18-lap race.

While the CRG teammates fought their own battle at the front, the action in the mid pack continued to intensify as each driver seized their last opportunities for a shot at the Championship podium.

Finishing largely where he started, in 5th and 4th for the Heats and 5th again in the pre-finals, the Filipino driver started on the third row of the Final grid, with his championship hopes resting on the final 18 laps of the season.

In the final, Eduardo exploded out of the gates storming, leap-frogging past 4th placed Ananthorn Tangnianatchai (CRG Thailand – CRG) and 3rd placed Alex Brown (7 Racing – OTK) within two laps. The Filipino continued to drive a consistent race even as the front runners began pulling away – but like a true racer, Eduardo kept his pace and patiently waited for an opportunity to make his move.

For 15 laps the two front-runners held their positions, with neither giving any hint of faltering under the immense pressure. Each lap counted down the remaining time left in the championship – and ticked away the grids’ last chances at an overall podium finish.

However, as the race went into its final two laps, the fighting between Putera Adam and Amer Harris Jefry intensified several fold. As the duelling pair cannibalised their own lap-times, Eduardo chipped away at their advantage in ever growing chunks.

The Filipino driver’s effort was not in vain – in the very last lap of the race and of the championship, Eduardo saw his opportunity and seized it with determined arms, as he first overtook Putera Adam followed by Amer Harris Jefry in the final few corners, bringing the grandstand to its feet and the title of Round 6 Champion back to the Philippines.

Coming in 2nd and 3rd were Putera Adam and Amer Harris Jefry from Malaysia, followed by Nikhil Bohra and Alex Brown from Singapore in 4th and 5th.

The Round 6 Senior Category witnessed the largest grid in the history of X30 Southeast Asia.

33 drivers, among them numerous National, Zone, and International title holders, assembled on the grid to bring a spectacular conclusion to the year.

Due to a few last-minute dropouts, the series was denied the privilege of hosting a full single-category grid for the first time in many years of Asian karting.

From the moment the formation convoy crossed the starting line, Prassetyo clung onto his lead with ferocious tenacity, leading the field into the first turn.

Right behind the Indonesian driver, Takeharu and fellow Japanese Yuki Mishima (RL Karting – BirelART) managed to catch a jump on Eshan Pieris just before the apex of turn one, snatching second and third positions respectively.

From there, both pole sitter Prassetyo and second placed Takeharu drove a commanding race and held onto their positions for the entire race, finishing first and second.

Things behind were not as straightforward as the mid pack fought fierce battles of their own. Third placed Yuki Mishima pulled a bigger gap from Eshan Pieris with each passing turn, leaving him to fend off the rest of the grid. Eshan would eventually fall through the carnage with each lap, finishing off the podium in 12th.

Yuki Mishima would also not be spared the cruelty of racing. The Japanese driver held on to a strong third for most of the race, only to lose it all in the penultimate lap, dropping to and finishing in 10th place.

Coming in 3rd was Daniel Woodroof from Malaysia, followed by Romain Leroux from Singapore in 4th and Silvano Christian from Indonesia in 5th.

Years of competitive racing had honed the level of race-craft among the Masters and Veterans to stratospheric heights. Once again, the most experienced grid of the weekend did not disappoint, with an undiminished turn of speed and display of controlled aggression.

Despite the lack of incidents, there was no lack of excitement as the grid kept close and shuffled the pack order spectacularly. In particular, Brendan Lim (Arina Racing) and Jeremy Nyam (RL Karting – BirelART) put up tremendous performances to carve their way up from 17th and 18th starting positions to 9th and 7th placings respectively.

The 1st placed finish was contested hotly between Ang Kok Wee and Jeremy Lee, with the Master and Veteran duo exchanging lead positions twice and twice again before Jeremy Lee took the chequered flag in first, with Ang Kok Wee coming in a close 2nd for a first in class finish.

In the meantime, Adrian Ferguson endured a series of ups and downs throughout the weekend to bring home a 3rd placed and 2nd in class finish, while Derrick Tan and Benjamin Chiang raced their own impressive weekends to finish 4th and 5th in the combined grid.

The weekend was once again dominated by the likes of Chia Wing Hoong (Stratos Motorsports – OTK), Sasakorn Chaimongkol (Maxima Racing), and Yongboon Tirachaimongkol (Independent), with the trio seizing the top 3 spots in the Heats and Qualifying.

The battle continued to intensify into the 2nd day, but disaster struck in the morning for both Sasakorn and Peter Chua – underweight measurements put both drivers at the back of the Final starting grid.

True to his talent and never-say-die attitude, Sasakorn drove a faultless Final from the get go, making up several places within the first lap. He would go on to slowly minimize the gap to second runner Yongboon with each passing lap till he was able to make a move on the inside of turn 3, relieving Yongboon of his second position in lap 8.

On the other hand, Alan Saw (Prodigy Racing) who had fought a promising battle in the races prior encountered bad luck in the first lap of the Final, spinning out and resulting in a DNF off the podium.

The Round 6 winners were: Chia Wing Hoong in 1st, Sasakorn Chaimongkol Yongboon Tirachaimongkol from Thailand in 2nd and 3rd, Ong Chee Mang from Malaysia in 4th, and Peter Chua from Singapore in 5th.

In a year filled with 6 rounds of blood, sweat, and tears, X30 Southeast Asia has witnessed some of the most spectacular racing in the recent years of Asian karting.

It has been X30 SEA’s pleasure to host drivers at 3 different circuits – X30 thanks all drivers for their support and will continue to strive to provide a fantastic experience for all.