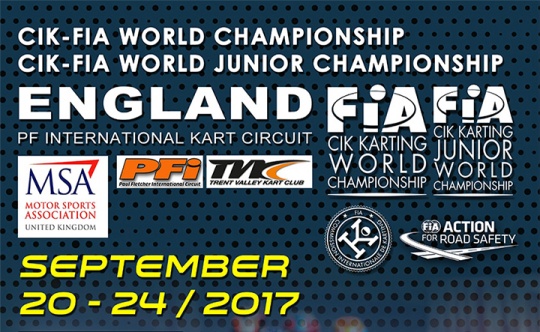 It is a kart racing season as exciting as ever the one which is going to reach its climax in Brandon, the British town in the heart of Lincolnshire which is hosting the CIK-FIA World Championship and the World Junior Championship next weekend. The two competitions are reserved to the drivers of the OK and OK Junior categories: it is the last appointment for World titles of the 2017 season, after that only a week ago, in Wackersdorf (D), the drivers of the KZ battled for their World title, while the KZ2 had its CIK-FIA International Super Cup. This year, too, international kart racing has showed incredibly skilled talents and cutting-edge technology, the real hallmark of this specific branch of Motorsport: this the reason why there are great expectations for the event at the PFi, where the 185 entrants to the two categories are going to challenge each other on the 1,382 metres of the track set not far from the famous town of Nottingham.

The award of the two World titles is going to get the usual media coverage provided by the two web channels cikfia.tv and cikfiachampionship.com. The live streaming from the PFi Circuit in Brandon will cover the whole racing programme on Sunday 24th , beginning with the last heats in the morning at 10:30, until the Finals and the podiums in the afternoon. Motorsport.TV will complete the coverage during the following week, with the broadcast of the special TV report featuring the recap of the British weekend.

SAMI TAOUFIK LEADS THE RACE TO THE OK TITLE.

Needless to say, in the OK Sami Taoufik from Marrakech (FA Kart-Vortex-LeCont) is the driver to beat after his brilliant victory in the European Championship of the category. However, the 2017 season has been full of surprises so far: just think of the Russian Pavel Bulantsev (Tony Kart-Vortex) who managed to climb up the standings and to become the runner-up of the Championship. Another frontrunner is the Italian Lorenzo Travisanutto (Zanardi-Parilla), always among the top drivers in the European competition and, eventually, third in the final standings. Good chance also for the Polish Karol Basz (KosmicVortex) and the Spanish Pedro Hiltbrand (Tony KartVortex), World Champions of the previous two seasons and both eager to redeem themselves after finishing the European Championship in the first six positions.

Jonny Edgar (Exprit-TM-Vega) is going to play a home match: the British driver aims at the Junior World title after his success in the European Championship. However, the OK Junior has always been a rather unpredictable category, so it is needless to point out that we might expect last moment surprises from one of the underdogs taking part in the competition at the PFi. Harry Thompson (FA Kart-Vortex), the runner-up in the European Championship, is the most dangerous rival for his fellow countryman Edgar, while Jack Doohan (FA Kart-Vortex), who seems in good shape in this last stage of the season, also stands a good chance after the third European place he achieved.