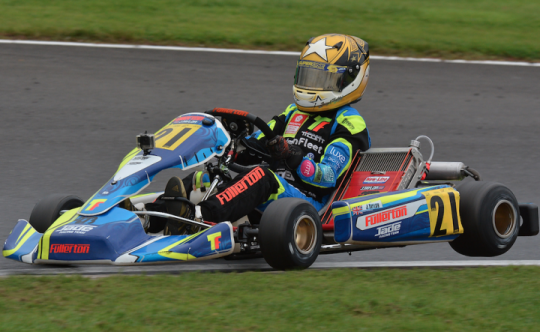 Press Release by: Super One Series
The 2017 Tuto Super One Series wrapped up with a spectacular event at PF International, bringing together all classes except Rotax 177. Ten new Champions were crowned, while more than 30 guest drivers joined the meeting to prepare for the World Championships next week. The weather was changeable with several classes having to contend with at least one wet Final.

Although swelled by ranks of overseas drivers competing at PF International in preparation for the CIK-FIA World Championship at two weeks, Qualifying was still headed by relative locals Jamie Flynn and Bobby Game.

Dean MacDonald won Final 1 from Flynn after a last lap move enabled him to finish almost a second ahead, and Sebastian Persson dropped off the podium with a spoiler penalty which promoted Pavel Bulantsev.

It was the other way round in the wet Final 2 with Flynn 1st and MacDonald 2nd with Game completing the podium. Ben Barnicoat had been 2nd briefly before he retired on lap 5, and Roy Johnson crossed the line 3rd but was penalised a lap for several misdemeanors.

Guest driver Bulantsev took pole on Sunday ahead of Dean MacDonald and went on to win Final 1 too, with Mark Kimber 2nd and Barnicoat 3rd.

The wet Final 2 was dominated by karting returnee Barnicoat who took the lead at the start from 3rd. Barnicoat pulled away from Bulantsev in 2nd while Jamie Flynn was promoted onto the podium when James Lingard was penalised.

Kimber is the new British Champion, finishing 22 points ahead of Joe Turney who was just a point clear of Oliver Clarke.

Morgan Porter took pole, 0.35s ahead of Joseph Taylor with Harry Thompson 3rd, however in Final 1 Thompson moved up to take the win ahead of Porter with Taylor a distant 3rd.

In Final 2 on a track drying after a shower Thompson led all the way with Porter and Taylor battling for 2nd in the latter half before Porter dropped to the back on the last lap. In what was becoming a theme, Alex Eades finished 3rd but was penalised, handing the position to Luca Griggs.

Thompson started Sunday with pole against Taylor but Final 1 went to Porter a quarter-second ahead of Jamie Day after Porter had fought with Thompson for most of the race.

Taylor won Final 2, held on a drying track, with Thompson crossing the line 2nd after leading much of the race. However, he was penalised for a dislodged spoiler, promoting Porter to 2nd followed by Singaporean Alex Huang.

Thompson is this year’s British Champion with Porter the runner-up and Day 3rd.

The season’s star Taylor Barnard qualified on pole followed by Coskun Irfan, then after the heats Barnard stayed ahead with Arvid Lindblad storming up the standings to 2nd.

Final 1 went to Maxwell Dodds with Irfan a fraction behind after a race where the leaders also included Barnard, Lindblad and Alex Dunne, while Josh Rowledge came through to gain 12 places and take 3rd.

In Final 2 Barnard was back on top in another pack race but finished well ahead after the last-lap skirmishes. Lindblad was 2nd by nearly 2.8s while William MacIntyre moved up to 3rd. Barnard is now confirmed as British Champion with 1159 points to Lindblad’s 1042.

Nelson King took pole but it was Louie Westover who dominated the heats, winning his two with Dragan Pinsent winning the other.

Reggie Duhy moved up five places to win Final 1 after a tight battle in the top six in the first half of the race involving Pinsent, Sean Butcher, Westover and Samuel White.

Then in Final 2 Butcher took the lead from Duhy and Matthew Hudson after five laps and pulled away by five seconds on the drying track.

Westover is the new Champion on 922 points with Butcher coming in 2nd by 24 points.

Danny Keirle took pole after a dead heat with Levi King was decided by second-fastest laps, then King topped the heats with two 2nd places with Keirle well down the grid after a DNF.

Oliver Hodgson gained three places to win Final 1 ahead of King, defeating Elliot Harvey who later received a spoiler penalty. Bradley Pennell came back to 3rd after dropping some places in mid-race.

Hodgson won again in Final 2 after passing Elliot Harvey who recovered well. Keirle had been in the lead and fighting with Harvey before he retired, leaving the way clear for Hodgson.

Despite his misfortune Keirle is this year’s X30 Senior Champion, 27 points ahead of Hodgson.

Daniel Butterworth took pole just over a tenth ahead of Zak Taylor, but in the heats previous round winner Robert Welham took control.

James Pashley won a lively Final 1 ahead of Archie Strong and Butterworth, with most of the race spent within a close leading pack. Kurt Roberts had also been one of the leaders after starting 2nd but dropped back at the end.

Final 2 was no less competitive with Welham eventually winning under a tenth ahead of Butterworth, and Pashley also spending time in the lead as well as dropping back to 6th at one point before coming back to 3rd.

After a relatively quiet weekend, Abbi Pulling has narrowly won the Championship, two points ahead of Pashley.

Bradley White came out on top of Timed Qualifying, three tenths ahead of Harry Moore, but on Saturday Stephen Letts dominated the two heats ahead of John Hogan.

Kyle Sproat came through to win Final 1 ahead of Letts after the battled all race, with Letts finishing 0.07s behind. Christopher Whitton took 3rd behind the battling pair and finished half a second behind.

In Final 2 they swapped places with Letts winning after a long battle with Sproat, with Whitton getting his nose in front briefly as well. White also mixed with the lead group and finished just over a tenth behind Sproat. Letts is the new Champion, 81 points ahead of Simon Vercoe.

Sonny Smith qualified on pole ahead of James Walker, with the top four within a tenth. Walker took pole for Final 1 after two 2nd places in the heats, while the wins went to Oliver Bearman, Daryl Taylor and Lucas Ellingham.

In Final 1 Archie Brown was the early leader before Bearman moved to the front of the pack, while Walker was penalised out of 2nd. Sebastian Bloch inherited the runner-up position followed by Brown.

There were six lead changes over the 12 laps of Final 2 with Brown and Aston Millar both having several goes at Bearman without being able to make it stick. Bearman secured the race and the Championship, finishing half a second ahead of Brown with Millar 3rd.

Final 1 saw three-kart battle all race with Hunter winning and Gilbert dropping to the back at the end, but in Final 2 Gilbert bounced back and fought with Hunter behind the leader Adams before taking the lead on the last lap.

Gilbert has take the Championship by 20 points from Hunter with Adams a further nine points behind that.

Tyler Chesterton took pole two tenths ahead of George Holbrook then took 4th and 1st in the heats, with the other win going to Holbrook. On Sunday he fought off Tommy Foster and Finlay Bunce to secure the lead at a third race distance but he could never fully shake off Bunce.

Rhys Hunter won the lively Final 2 after a heartbroken Bunce retired from the lead on the penultimate lap. Bradley Barrett came in 2nd by a tiny margin and Tommy Foster 3rd while Chesterton and Tom Edmunds also had brief shots at the lead.

Chesterton is the new Champion, finishing 52 points ahead of Barrett with Rhys Hunter 3rd.

32 OK-Junior guest drivers lined up to familiarise themselves with the track and equipment at PFi in preparation for the World Championships, from both British and European teams. They were racing in the same format as the British Championship class with Qualifying and two Finals on both days.

Zak O’Sullivan took pole ahead of Malthe Jakobsen but in Final 1 Jack Doohan took the win after O’Sullivan came off at the start and a large proportion of the field received bumper penalties. Dexter Patterson took 2nd and Pietro Delli Guanti 3rd. Doohan won again in Final 2, a wet race which was stopped by a red flag after 75% race distance. Patterson was 2nd again, by just under three tenths, but 3rd-placed Gillian Henrion was over 11s behind.

Sunday morning started off dry and Doohan was on pole, with Patterson 2nd. However, in Final 1 Doohan was penalised a lap after fighting with Patterson and Zane Maloney for most of the race. This gave the win to Paul Aron ahead of Alessandro Ceronetti and Jakobsen. Patterson quickly got the better of Aron in the early laps of Final 2 but Aron stayed 2nd while Maloney and Ceronetti fought behind him, ending in DNF for both of them. O’Sullivan finished 3rd, 5s back.