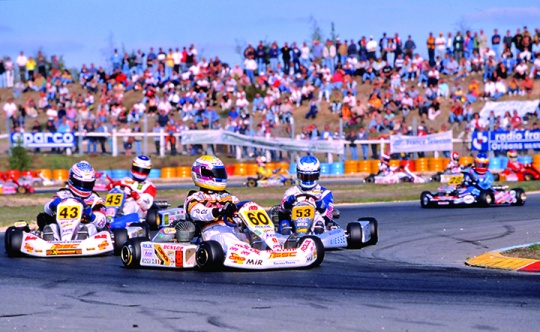 Author: Vroomkart International
20 years later the final race of the 1997 Super Formula A World in Salbris, we want to celebrate Danilo Rossi with this 20 year-old article...
Four for Rossi!

It seems as if we have gone back in time. Rossi-Manetti in Ugento 1992; Rossi-Manetti at the world championship in Salbris. However, on this occasion, the two Italians are in the same team and CRG’s triumph is even greater. Triumph because after Pantano’s danger over the early laps, no one else managed to get close enough to attack the CRG duo. The race final changes into a parade. A result that built up thanks to the skill of these two drivers, the hard work carried out by the team, and  above all Zaggia’s and Calore’s dedication, two young determined men who worked hard early on in the season to develop the CRG engine that, in the end made the difference. It’s Danilo Rossi’s 4th title that he gained only five years after starting out with the rotary valve.

The rain on Friday, and rainfall during qualifiers, foments doubts on championship results. The police that break in, summary judgement that involves CIK presidency (an unforgettable Ernest Buser, author’s note) guilty of not having accepted Foglieni’s subscription because of initials on the model of an engine. And that’s not all. The county of Salbris that makes them take down the banners advertising ELF because the same hadn’t paid the advertising tax. Everything had developed, it seems, due to a dispute between the CIK and the organiser who got his own back, a refusal from Buser during the second round of the European Championship. Well, not a very good situation, which didn’t do much good to the image of the most important event of the season. Then, luckily, the sun came out, and the race brings everything back to normal, thanks to the excitement. An all Italian celebration with Rossi predominating in FSA, Manetti and Pantano, all on podium in this same order.

It continues on Vroom Kart Magazine.