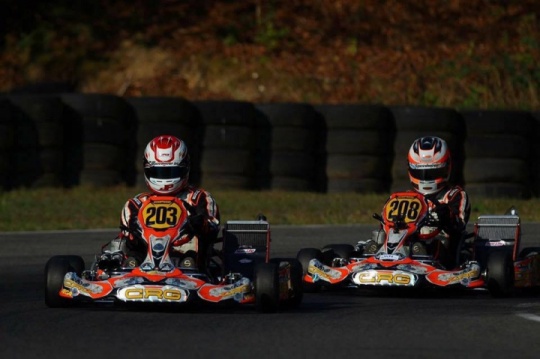 Author: Vroomkart International
Both are incredibly fast on German tracks, as confirmed by classification of the Deutsche Kart Meisterschaft. Eyes on these terrible duo in Wackersdorf!
Jorrit, Stan joined KZ this year and he immediately demonstrated that he could do well, are you worried by your little brother?

J. "I’m not worried about any driver, so also not about my brother. I see it as an advantage that he is in KZ now because two strong drivers only make us beter as a team. His strength is the incredible speed he proved this year. His weakness is that this is the first year in KZ and he still can improve in his driving style."

You dominated the last three races of the DKM in Wackersdorf: what’s your secret on this track?

J. "I don’t have any secrets I just really like this track a lot."

This year there were just a few drivers in KZ, why? In your opinion, what should be done to change this situation?

"They have to change the rules back to as there were. The first 6 drivers of the KZ2 are obligated to drive in the KZ class the next year and they have to stop penalizing people with the front spoiler system if they did’t do anything wrong, but the driver in front make a mistake."

Stan, how was your first year in KZ? Was the level much higher than in KZ2?

S. "I’m happy with my first year in KZ. During all races I was fighting on the front, so it's not that bad for my first year with ''big guys’". Sure the level is higher but I enjoy it a lot. It’s hard racing but most of the time also more fair then KZ2."

What do you expect from this World Championship?

S. "I expect to be in the front again and fight for the win, in the end the only thing when you race is to win it."