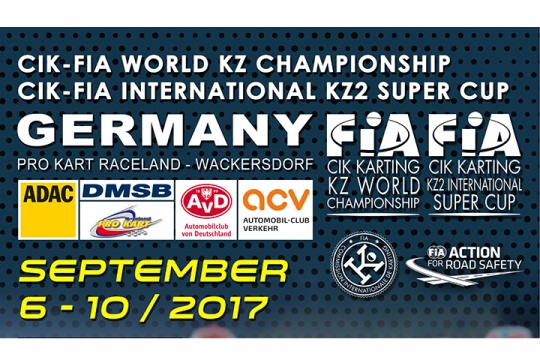 Press Release by: WSK
The KZ World title to be awarded next weekend, from 6 th to 10th September, hosted by the Prokart Raceland IN Wackersdorf (D). Alongside with the CIK-FIA World KZ Champs, The International KZ2 Super Cup. Live web on Sunday 10th on cikfia.tv and cikfiachampionship.com.
THE RACE TO THE WORLD KARTING TITLES BEGINS IN WACKERSDORF.

The CIK-FIA World Championship is the most important event of the season, which begins - as usual - immediately after the summer break. The stakes are high for all the protagonists of all the categories of international karting. This time they compete for a world title: just after the end of the European Championships, in few weeks the KZ, OK and OK Junior categories will have their new World Champions. The first categories to get back on track are KZ and KZ2. From 6th to 10th September, the Prokart Raceland in Wackersdorf (in Bavaria, Germany) is hosting the KZ single event of the World Championship and also the CIK-FIA International Super Cup for the KZ2. Two weeks later, at the PFi circuit in Brandon (UK), it will be time for the OK and OKJ categories to compete for the world title.

DUELS ON VIDEO FROM BAVARIA.

162 drivers entered the Wackersdorf event for the KZ and KZ2, to try to achieve a success which could be the top fulfilment of the season. WSK Promotion, as always, is working hard to provide full live media coverage for the decisive day of the event. On 10th September, the images of the live streaming will be available on cikfia.tv and cikfiachampionship.com, from the start of the last heats at 10:30 until the end of the last Final in the late afternoon. The recap on Motorsport.TV, during the following week, will complete the picture of the first weekend dedicated to the World Championships.

THE CHALLENGE TO PAOLO DE CONTO IN KZ.

In KZ, Paolo De Conto (CRG-TM-Bridgestone) is the holder of the most recent and important titles: he is the winner of the 2016 World Championship and of the just ended 2017 European Championship. Curiously, the Italian driver won both the titles on the Swedish circuit of Kristianstad, where the CIK-FIA European event finished few weeks ago. De Conto is eager to confirm his recent performance, while his opponents are definitely looking to seize the occasion to beat him. It is the case of the Czech Patrik Hajek (Kosmic-Vortex) and the Dutch drivers Marijn Kremers (BirelArt-TM), Bas Lammers (Sodi-TM) and Stan Pex (CRG-TM), who finished all behind the Italian in the European Championship. Good chance also for the German Leon Köhler (Tony Kart-Vortex), the new KZ2 European Champion, promoted to KZ.