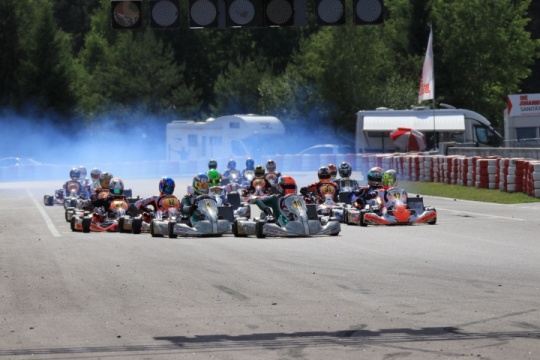 Press Release by: DKM
For the first time the German Kart Championship is going to take place twice at the Prokart Raceland Wackersdorf.
After the semi final in July, it is now going to continue with ranked races seven and eight. There is still a lot of excitement regarding the titles in all classes. Two weeks before the Kart World Championship numerous international stars are going to use this event as preparation. All in all, 172 drivers are going to start.
The German Kart Championship is tying in with the past good years in 2017 as well and is enjoying a lot of national and international interest. The field of participants at the second event in the 1.190m long Prokart Raceland Wackersdorf is accordingly big. All four classes are strongly manned and promise lots of excitement.
The two shifterkart categories are going to be the focal points this time: Two weeks (September 8th – 10th) before the Shifterkart World Championship, numerous drivers are going to use the races as preparation. There is still a lot of tension regarding the awarding of the titles too though. The leading drivers of all four classes are closely together. The leading drivers who are going to start in Wackersdorf are Dennis Hauger (DKM), Hugo Sasse (DJKM), Jorrit Pex (DSKM) and Lucas Speck (DSKC).

Kart racing fans at home can look forward to full live action from Wackersdorf again. On Saturday (from 11am on) and Sunday (from 9.30am on) 15 hours of live images of the races incl. award ceremony and interviews with the drivers are going to await in www.kart-dm.de the viewers. All events are going to be captured by up to nine track cameras, three onboard cameras and two mobile devices – all in HD quality. After the race on Sunday (September 10th) there is also going to be a 30-minute highlight magazine again at 8:30pm on the automobile-, engine- and motorsports-channel MOTORVISION TV.

DKM: Hauger and Schumacher fight for the title

40 OK drivers are going to start at the fourth event of the German Kart Championship at the Prokart Raceland this weekend. As the overall leading driver, Norwegian Dennis Hauger (CRG Holland) is going to travel to Upper Palatine. The reigning junior champion already won the half-time races on the same track and therefore belongs to the favorites this time as well. “The last races in Wackersdorf went very successfully for me and I’d like to tie in with this”, said the youngster beforehand. He can’t rest though: his strongest opponent regarding the fight for the championship is David Schumacher (KSM Schumacher Racing Team) – currently only four points separate the two. In the ranked races the son of former Formula 1 and DTM driver Ralf Schumacher is going to try to jump back on top of the podium again. So far he celebrated three race victories this year. A little behind follows Glenn van Berlo (CRG Keijzer Racing) from the Netherlands on third place. On the fourth and fifth places are KSM Schumacher Racing Team-drivers Felix Arnold and reigning champion Paavo Tonteri.

With five winners in six races, the young drivers of the German Junior Kart Championship present themselves in a very balanced way. So far, Hugo Sasse (CRG TB Racing Team) has the best results. The youngster from Saxony-Anhalt just celebrated a victory in Wackersdorf and is going to try to repeat this success. With an advance of 24 points he always has to be aware of his pursuers though. These are led by Kas Haverkoort (CRG Keijzer Racing Team) in front of Niels Tröger (CRG TB Racing Team), Italian Luigi Coluccio (KSM Schumacher Racing Team) and Hadrien David (Chiesa Corse). With only 45 points missing on the leading Sasse all five still have realistic chances of winning the championship. “This year the juniors are especially close together. Shortly before the finale there are still five drivers with chances of winning the championship. There is no room for mistakes”, says leading driver Sasse.

There was a change regarding the lead of the German Shifterkart Championship at the half-time race in Wackersdorf. The up until then leading driver Stan Pex (CRG Holland) had to deal with a falling out and had to watch as his older brother Jorrit celebrated his first victory of the season. Right before the final spurt the two are only nine points apart and would reach the next highlight of the DSKM-success story of the Pex family with a double victory at the end of the year. “I was really happy about my victory at the second race. Looking at it from my family’s angle it was of course unfortunate that Stan already had to drop out before the start”, said leading driver Jorit Pex in the winner’s interview. Behind the brothers Fabian Federer (CRG/TM) is waiting for his chance. At the last event in Wackersdorf the South-Tyrolean dominated qualifying and the heats. He then had to drop out of the first final race prematurely though and lost important points. The top five are completed by Jeremy Iglesias (Formula K Racing Team) and Flavio Camponeschi (CRG Germany) – both of them already achieved a race victory too. André Matisic (Solgat Motorsport) is the best German driver on seventh place.

The DMSB Shifterkart Cup is a real success in its second year as well. The field has been filled up to the last place from the beginning of the season with 34 drivers and has seen very balanced races so far. There have been five different winners in the races so far. The championship is currently being led by German Lucas Speck. The Rhinelander impressed with his consistency and drove among the front field during all the previous races. One of his strongest opponents is David Detmers (MSR Motorsport – WST Power) – in Kerpen, the Austrian won twice and was on track towards victory at the last event in Wackersdorf as well. A damaged tire stopped him during the first race though. “That was a real low point during the weekend. I was clearly in the lead and lost a lot of ground due to this. Now I have to fully attack during the remaining races”, Detmers said fiercely. He then highlighted his potential during the second ranked race due to a great catching-up race and thereby stays close to Speck. Jeron Boes (CRG Holland) is currently on third place on the overall list of rankings with the same amount of points as Detmers. The top five are completed by Julian Müller (Mach1 Motorsport) and Moritz Horn (CRG TB Racing Team).

After the free trainings on Friday and Saturday morning, qualifying is going to follow for the individual classes. These will set the starting positions for the twelve heats in the afternoon. The best 34 then qualify for the big final races on Sunday. These will start at 9.40am .