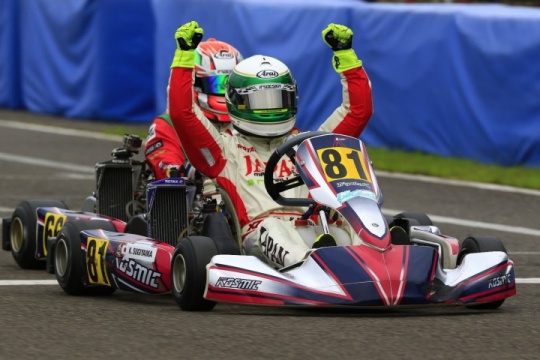 Press Release by: Rotax Kart
The 4th Rotax Max Challenge Japan Mizunami Series was held on the 30th of July on a hot and humid weekend. The round 5 will be held on September 3rd.
On Friday and Saturday, the track was dry, and drivers had chances to try different settings for the upcoming race, but Sunday was a completely different story.
Light rain shown up several times during qualifications, forcing drivers and mechanics to make crucial decisions with the correct tires. The show was promising.

After a slippery qualifying heat, Enzo Yeh made it to the pole with Fuji Kishi P2. From the start, Enzo kept the lead. Ryota Horachi from P7 overtook 3 drivers on the 2nd corner. By the end of the first lap, he made it up to 2nd position. On lap 3 Ryota made an attack on Enzo, also giving opportunities for the followers to get through. Enzo dropped to 5th, the leading group composed of Horachi, Kishi, Komata and Fujii quickly escaped and battled for the lead throughout the race. On final lap while leading, Fujii made a slight mistake. Horachi went for the gap. As the door was still opened, Rito Komata also went in, but that wasn't sufficient Rito clipped Fujii on the move, sending himself in the grass and ruining chances for both to be on the podium and scoring big points. Horachi took the win, 2nd Fuji Kishi and 3rd Enzo Yeh.

Ryota Horachi, double entrant in Micro and Mini is on pole position for his second final. Daisuke Yamashita is alongside for the front row. At start, Ryota pulled away easily, leaving others far back. Daisuke, multiple times winner in the series this year seemed unable to follow the pace and felt down to 4th at the end of the first lap. Ryota was dominating this final and increasing his pace.
Meanwhile, in the chasing group, 4 drivers were up for the show with constant passes and daring moves. on lap 12, one of the protagonist for the podium Shohei Koguchi lost his side protection. Meatball for him, his race was over. Daisuke, the ranking leader in this category gave all he can to save some points for the championship. On the final lap, he contained all attacks made by Sakai and Kuriyama. Second Victory for Horachi, 2nd Yamashita and 3rd Sakai.

Kazuki Hayakawa was the fastest man on the grid with Yoshinao Adachi by his side to form the front row. Behind them, a strong squad of Daido University drivers were ready to challenge them.
After a clean start, all drivers remained fairly packed. Takumi Iwahara from Daido U. stole P2 from Yoshinao. A small incident on turn 9 caused the racers to split in 2 groups. Takumi realizing Kazuki's fast pace decided not to attack, cruising behind to build up a sufficient gap. On lap 7, and with a handful of seconds ahead, Takumi made his move for P1. With a 1,3s gap, he was able to keep this position until the checkered flag. Takumi winner, KAzuki 2nd, Yoshinao 3rd.

31 contenders were lined up for the finals and Toranosuke Hamada is on pole. Kento Omiya 2nd, Shin Hattori 3rd and Sena Shirakawa 4th composed the front rows. At start, Shin was well placed on the inside line to and took 2nd behind Toranosuke. A group of 6 drivers exchanged the lead in closed combats and 3 of them made the difference. Moriyama, Omiya and Toranosuke were clearly stronger, monopolizing the front with ongoing battle for the lead. But things started to get even more interesting. Kotaro Shinbara, who started the race from 29th worked all his way up in stealth mode, completely off the radar, overtaking lap after lap. With 7 laps to go, he made it to the top 3. On final lap. Moriyama was in the lead. Kotaro managed to grab 2nd in a desperate attack on Omiya. Moriyama felt the immense pressure in the final corners and tried to defend his position. By being too defensive, he missed his racing line and opened up a gap for Kotaro to get through and steal the win by 0.018s. Whooping victory for Kotaro, Moriyama 2nd and Omiya 3rd.

Yoshimi Inoue and Kengo Sugiyama are on the front row in this full grid final. fromt he start, both  escaped bumper to bumper. Kouzo Nakamoto quickly joined them in 3rd position. All 3 exchanged lead from time to time, but Kengo had the final word each time. Positions remained almost unchanged throughout the race. With 2 laps to go and increasing attacks among the 3 tenors, Masanori Kato and Kei Yuge joined them for the final showdown. Kengo was to contain everyone to claim victory. Masanori and Kei managed to overtake Yoshimi in the final corners. Big W for Kengo, Kouzo 2nd, Masanori 3rd.

Koki Mizuno, the multiple winner of this series is on the pole once again with Ren Sato next to him. On the opening lap, hole shot for Koki, followed by Ren Sato, Akinori Kikuchi and Daisuke Takaguchi. This squad had a rapid pace and detached from the rest. They offered a great show with exciting changes for the lead. The chasing pack with Matsuzawa, Saito, Taira and Tsukada quickly joined to form a long line of leaders. With 4 laps to go, no clear winner was declared as the positions keep swapping. With 3 laps to go, a very nasty accident sent several drivers flying to the grass. The race control triggered the red flag due to the severity of the crash, and some drivers badly injured. The race was suspended. Akinori Kikuchi has been declared winner, Koki Mizuno 2nd and Ren Saito 3rd. 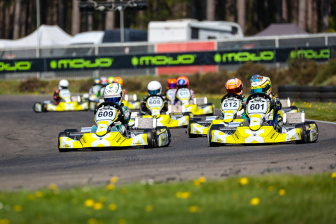 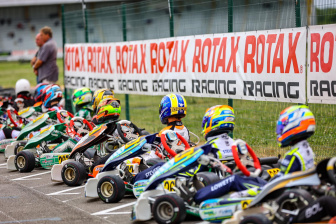 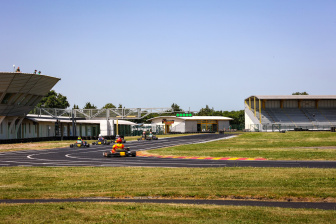 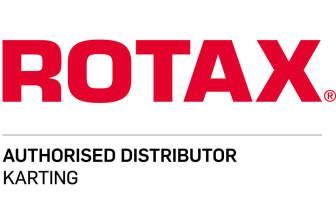 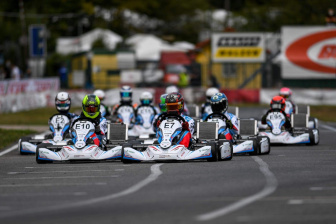 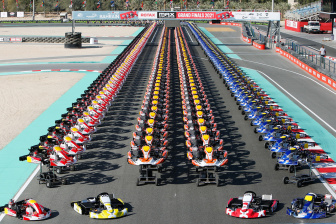