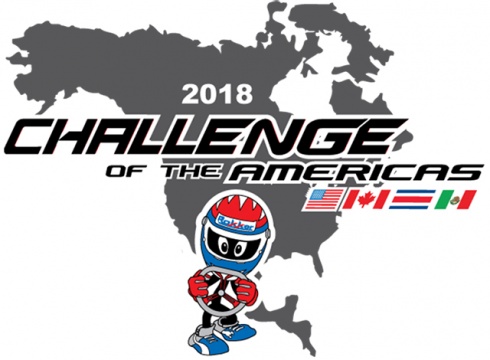 Press Release by: Race Tech Development
The 2018 season for Challenge of the Americas is taking the program into a new era, with the three event schedule now confirmed.
For the 11th season of the international winter series in western North America, the Challenge is switching to the Vortex ROK engine platform and Bridgestone tire line. The same family and team friendly environment is expected for the new Challenge format, featuring some of the best racing in the country for the first quarter of the season along with the one of the most organized, structured race staff on the continent or around the world.

“This off-season for the Challenge has been an interesting and exciting one,” stated Challenge of the Americas promoter Andy Seesemann. “Our move to the Vortex ROK engine package and Bridgestone tires aligns us with two of the most respected brands in our sport and motorsports in general. Racers and teams can expect the same fun, fair, safe, and exciting weekends they have experienced with COTA the past 10 years, just with a new look and a new sound.”

After 10 years utilizing the Rotax engine package, the Challenge of the Americas is set for the debut of the Vortex ROK powerplants. The ROK engine line offers the same age group packages with similar classes to be offered at the Challenge for 2018 as in previous years. The Mini ROK engine is aimed at the younger generation of kart drivers, utilized in Mini ROK class and Micro ROK category (with restrictions). The ROK GP engine is the next step in the Vortex engine line, used in the Senior, Master and Junior classes. The Junior package has a restricted exhaust header. Rounding out the Vortex engine line is the ROK Shifter engine for ROK Shifter Senior and ROK Shifter Master.

“We have spent a lot of time introducing the Vortex ROK engine platform to a number of clubs and tracks along the western half of the United States this summer,” added Seesemann. “There is a strong contingent in southeast USA and some branches growing in the northeast and midwest. The recent engine trade-in program we launched has started strong growth in Northern and Southern California along with other western states. We will continue to introduce the ROK packages throughout the remainder of the 2017 season as we gear up for a big 2018.”

Since the beginning of Challenge of the Americas, international racing has always been the goal for champions. The 2018 season will be no different with tickets to the 2018 ROK Cup International Final. The annual event draws one of the largest contingent of racers to the South Garda Karting circuit in Lonato, Italy hosting ROKKERS from all over the world to compete for the year-end titles. In addition to the trip to Italy, tickets to the annual ROK Cup USA Finals will be up for grabs to series champions, along with other weekend and year-end prizes.

The three tracks that will make up the 2018 Challenge of the Americas will take the program to three different regions in the west. January takes teams and drivers to the Phoenix Kart Racing Association to open up the season. The historic 3/4-mile course outside Phoenix allows little room for mistakes as it separates the good from the bad. The February event takes the program back to the CalSpeed Karting Center in the Los Angeles area. The course, which sits outside the Auto Club Speedway, was last on the Challenge schedule in 2013. 2018 wraps up in April as the Simraceway Performance Karting Center holds the series finale for the fifth straight season in Sonoma wine country.

“Our schedule remains to be among the best laid out for the timetable we operate. PKRA has been part of the Challenge since the beginning, and we are happy to start off the new era in Phoenix. This year, we have return back to southern California with the strong support from teams and customers of the ROK program, including the Tri-C Karters. We attempted to move our finale back to March, however, scheduling conflicts stopped those wishes so we will again end the Challenge in the month of April. There is no other program that includes all three unique, challenging and great destinations like the 2018 Challenge of the Americas.”