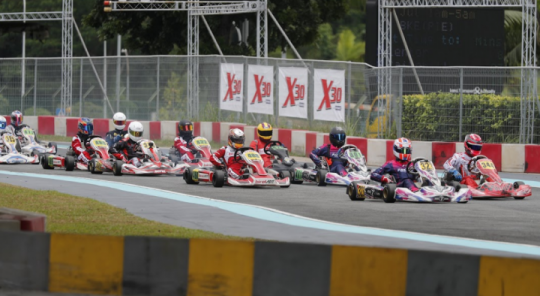 Press Release by: X30 Southeast Asia
The fifth round of X30 Southeast Asia returned to KF1 Karting Circuit in Singapore for the 3rd time this year.
With only 2 rounds left to go, the highly technical and challenging track played the perfect host to some of the most spectacular racing since the start of the season.

Every category was charged with tension. Drivers gave it their all and more, in the never-ending fight for championship points and to leave their mark on racing history.
A mostly hot and humid start to the weekend soon revealed unwelcome surprises – shortly before the Final, the skies darkened and a thunderous downpour rained down chaos and panic. A wet race was declared.

But in true tropical fashion, the rain left as quickly as it had arrived – and the track dried in record time in the blistering sun. Here’s what happened.

The weekend saw Yevan David (G51 Motorsport – Energy) on an unstoppable streak as he sped to secure pole positions for the Pre-Final and Final.

The fastest man in the qualifying, however, was Tiziano Monza (7 Racing – Kosmic) with a laptime of 50.656s. Beating out 17 other drivers in the Qualifying, Tiziano Monza took home the GoPro Fastest Lap Award, presented to the Cadet Category for the first time this year.

In the 4th lap, Christian Ho took the inner line on Turn 12, making his move on the Kosmic. Capitalizing on the opportunity, Yevan followed suit and continued to battle Christian for the rest of Heat 1, finishing just 0.055 seconds behind Christian.

Having dropped down to 4th place at the start of the Pre-Final, Yevan embarked on a hunt for the front runners. After overtaking Tasanapol Inthraphuvasak (Maxima Motorsports – Benik) and Cui Yuan Pu (AutoInc Racing – BirelART), he was again at the back of Christian Ho.

At Turn 12 in the second lap, Yevan made his move on Christian and overtook him, claiming the lead. In the meantime, 4th placed Tasanapol seized an inside line on Cui, who had no choice but to relinquish his 3rd position to the perceptive Thai driver.

In the Final, Yevan had a clean race, dominating in all 12 laps as the front runner and finishing as Champion, followed by Christian Ho in second and Tasanapol Inthraphuvasak in third.

Also on the Cadet Category podium were Zachary David (3rd Runner up) from Malaysia and Tiziano Monza (4th Runner Up) from Singapore.

Alex Brown (7 Racing – Kosmic) blazed the trail the entire weekend, with a blistering time of 45.482 seconds in the Qualifying.

The Singaporean driver took pole positions for the Heats, Pre-Final, and Final - eventually finishing as Champion. Alex also won the GoPro Fastest Lap award for the Junior category with his qualifying time.

Things were however not as rosy over at the I.S. Racing – CRG camp. Strong contenders Amer Harris Jefry and Nikhil Bohra pulled off promising 2nd and 4th placed finishes in the Pre-Final, but unfortunately did not manage to start the final due to technical issues.

Eduardo Coseteng (BMS/PSR – Kosmic), who had started at the rear of the Final grid after a DNF in the Pre-Final, managed to overtake both Wahyu Norhashim and Supakit Jenjitranun (both of AutoInc Racing – BirelART) in the first lap. Biding his time, he eventually overtook Nik Zamir Zakwan (I.S Racing – CRG) and Alex Huang (DT Racing – FA Kart), and sped off to finish 2nd.

An incident between the CRG and FA drivers however, left Nik Zamir with a DNF and both drivers off the podium.

Results pending outcome of appeal. True to form, the Senior category made for some of the most exciting action over the weekend – offering up perhaps the most sensational racing since the start of the season.

Romain Leroux and teammate Prassetyo Hardja (both of Stratos Motorsports – OTK) set the best times in the Qualifying with 45.185 and 45.189 seconds respectively.
The duo continued to play hot potato with the lead for the rest of the Heats and Pre-Final, until a failed manoeuvre from Romain in lap 13 dropped both drivers to 8th and 11th respectively.

With the front runners out of the picture, the rest of the pack seized the incredible opportunity – Jarute Jonvisat (Maxima Motorsports – Benik), Eshan Pieris (RL Karting – BirelART) and Jacob Ang (BMS/Petron Racing – Kosmic) leapt to close the gap, finishing 1st, 2nd, and 3rd in the Pre-Final respectively.

The Final was no less spectacular – the first four laps alone shuffled the pack order like a deck of cards, with countless position changes drawing a tango on the lap-chart.

With the Stratos Motorsports pair starting from the middle of the grid, the rest of the category scrambled for precious gaps in an incredible display of race-craft and calculated offensives.

Eshan Pieris from Sri Lanka started the Final in pole but soon dropped numerous positions, after being overtaken by Thai nationals Sasakorn Chaimongkol and Jarute Jonvisat (both of Maxima Motorsports – Benik). Sasakorn eventually took the chequered flag in 1st, but things were not as easy for his teammate Jarute.

After losing the lead to Sasakorn, Jarute had another battle to fight with Romain Leroux, who had clawed his way back from the middle of the grid.

For 3 laps the Singaporean held his ground ahead of Jarute, until yet another manoeuvre from the Thai national resulted in Jarute taking the chequered flag in 2nd and Romain in 4th.

In the meantime, championship leader Prassetyo Hardja had also regained numerous positions after a bad start. After climbing an incredible 8 positions, the final moments of the race saw him challenged by 2016 Champion Yeo Hong Yang (AutoInc Racing – BirelART).

Yeo Hong Yang, who had been tailing Prassetyo for 7 laps, took an inside line in the final turn of the final lap, sticking an incredible move that put him in 5th for a truly spectacular finish to the Senior Category’s weekend.

After a near perfect weekend for both drivers, Ang Kok Wee and Jeremy Lee are now set to win the Overall Championship titles with humongous leads over their closest rivals. Jeremy Lee also took home the GoPro Fastest Lap Award with a monstrous laptime of 46.588 seconds in Heat 2 on used tyres.

In stark contrast, it was an uphill battle for Adrian Ferguson (Veritas Racing – Zanardi) the entire weekend. Despite coming in 2nd in Qualifying, Adrian was forced to retire in Heat 1 after a dramatic spinout due to brake failure, 3 laps from the finish.

Championship hopeful Brendan Lim (Arina Racing) who had been tailing the race leader bumper to bumper, slammed headfirst into the Zanardi as a result and dropped to 14th position before finishing in 12th.

Adrian Ferguson did his best to make up for lost placings, finishing 3rd in Heat 2 for a 9th position on the Pre-Final starting grid. A respectable 6th place finish marred by a 10s fairing penalty again relegated him to 8th on the Final starting grid.

The Final saw the Zanardi climbing the pack over 16 gruelling laps, and a high-stakes skirmish with fellow Master Category Driver Derrick Tan (Eugene Racing).
Deciding that it was not his fight, Veteran Jeremy Lee made the safe call and opened a corridor for Adrian and Derrick to continue their fight. His strategy paid off and the BirelART driver continued onto a 1st in class finish without the unnecessary risk from the younger drivers.

The final and deciding round will take place on 23rd and 24th September at Sepang International Kart Circuit, Malaysia. More information can be found on www.x30sea.com