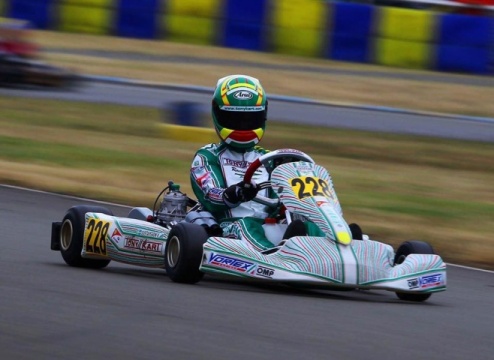 Press Release by: Tony Kart
Fourth and penultimate round for the OK and OKJ European Championship. The Finnish CIK-FIA championship step is expected to be full of pathos in the OK category. The championship final is now closer than ever and three of our drivers are struggling for the title.
OK. After the competitions in Italy, Spain and France the absolute ranking is led by our David Vidales, whose gap on his chasers is reduced to a minimum.
Among the top drivers in the championship we can boast, in addition to the already mentioned David, Clément Novalak (4th) and Pedro Hiltbrand (8th).
The small gaps among the top drivers in the standings include the three of our above-mentioned drivers in the fight for the title.
Gianluca Petecof, though more detached in the overall standings, will not give up on aiming at the top, aware to have good chances to get important positions, as happened in the recent Le Mans (France) event.

OKJ. Next to Viktor Gustavsson, in the Racing Team since the beginning of the season already is Andrea Rosso who will have his debut. Two drivers of this value will be an indispensable incentive for both of them and for the staff as well, who will do the best to make Andrea quickly integrating into the team and make the most of it. The event in Alaharma will be broadcast, as always, in live timing from Thursday, July 20th. Sunday's finals (23rd) will be broadcast in live streaming on the official CIK-FIA channel.
News, photos and statistics of our Racing Team will be available on the official facebook profile @tony.kart.official and at www.tonykart.com