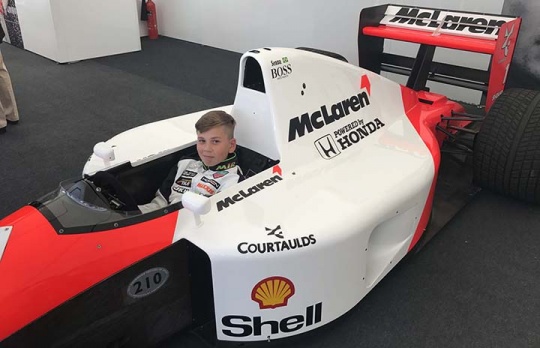 Louis Malmesburyand his kart were on display at the Wera Tools stand who became one of his sponsors after an introduction earlier this year by another sponsor Ideal Displays of Swindon.  Ideal Displays have supported the young driver almost since he started karting. The chain of events that then unfolded at Goodwood were out of this world for Louis who turns thirteen this week.

Unknown to Louis another sponsor and mentor David Mitchell of dna-rB Ltd had a few surprises lined up for him at Goodwood Festival of Speed. This started with an initial visit to the Mercedes F1 pits for a look around the car and garage. Here Louis and his sister Lilli both got to hold one of Lewis Hamilton’s F1 steering wheels and were told all about the controls before being given a guided tour of the garage and an F1 car. But this was only the beginning of a string of exciting events.

Saturday morning Louis and his family were made welcome in the Mercedes VIP hospitality area where they all got to meet and chat with Valtteri Bottas. This was followed by the Mercedes Silver Arrows guided tour which went over all the decades of Mercedes involvement in all aspects of motor racing.

Later that day in the F1 pits area Louis was invited into a number of the garages including McLaren, Renault and Redbull where he was lucky enough to meet former F1 and Formula E driver Nick Heidfeld plus Red Bull young driver Pierre Gasily for pictures and autographs, and to sit in the F1 cars of Jenson Button and the iconic Ayrton Senna.

Luis had the opportunity to chat about kart racing and Formula One with championship contender Valtteri Bottas. Thinking his day couldn’t get any better his phone lit up whilst he was having his tea at the campsite with a message that Valtteri Bottas had started following him on Instagram which was directly followed with the personal message of encouragement to the youngster. Motorsport & social networks: new dynamics of the 21st Century. “He was really great” said Louis “He started in karting with his dad just like me and made it to F1. He encouraged me to never give up as anything is possible, he is now following my progress on Instagram and sent me a really nice message.”

Sunday and another dna-rB surprise came in a return visit to the Mercedes hospitality for morning tea and the opportunity to meet the current Formula one champion Nico Rosberg.

But this wasn’t the end of the young driver rubbing shoulders with the stars as later on the day he was wandering past the Renault F1 garage when lots of people started shouting “Robert” Louis and his family wandered over and tried to see over the crowd. As the security pushed people back Louis slipped through a gap and came face to face with former F1 driver Robert Kubica who it is rumoured maybe making a return to the sport. Kubica noticed Louis in his race suit and happily stood for a photo and signed an autograph. Kubica later shared Louis’s picture on his own Facebook page to Louis’s delight.