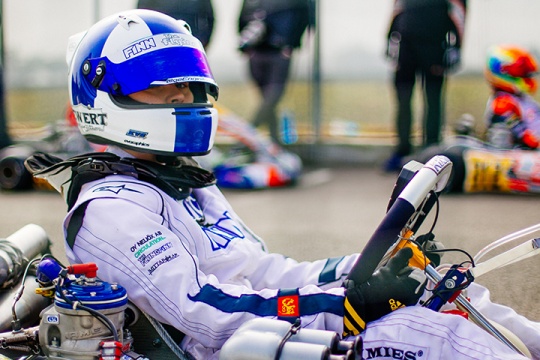 Press Release by: FIA Karting
2017 is a particularly important year for the great nation of motor sport that is Finland. Indeed, it is the centenary of the independence of this Nordic country which has produced a large number of enthusiasts and several world-renowned Champions.
The fourth of the five Competitions of the CIK-FIA European Championships, in the OK and OK-Junior categories, as well as the third and final Competition of the CIK-FIA Karting Academy Trophy, will be held from 21st to 23rd July on the Circuit of Alahärmä to the north-west of Helsinki.

With about 5.5 million inhabitants, Finland has an unusual density of Drivers, in all disciplines. The Finnish kartmen are in particular great regulars in the European Competitions which they frequent throughout the season. The 2002 CIK-FIA Super A World Championship was won by Ronnie Quintarelli (Birel / TM), the winner of the two Finnish races held on the track of Alahärmä. In 2003, at a European Formula A Championship Competition, Stian Sörlie (Gillard / Parilla) won in Race 1, while Davide Foré (Tony Kart / Vortex) won Race 2 in Alahärmä.

The new generation of international Drivers will discover a spectacular 1326 m long track with a bridge and banking. Located within an amusement park, the circuit offers many opportunities for entertainment. Although three out of five Competitions have already been contested, the outcome of the CIK-FIA European Championship and the CIK-FIA European Junior Championship is not yet certain. The two European titles will be awarded a week later in Sweden at the end of the Kirstianstad Competition, but the Finnish Competition may mark the turning point of the season. Another noteworthy feature is that a significant number of Drivers from the region, including the Finns of course, have signed up solely to this Competition with the goal of being noticed.

Jonny Edgar (Exprit / TM Racing / Vega) took the lead in the provisional ranking of the CIK-FIA European Junior Championship after being delayed early in the season. He may well be the revelation of the year, but he will also be the man to beat in Finland. Hadrien David (Zanardi / Parilla / Vega), O’Neill Muth (Zanardi / Parilla / Vega), Harry Thompson (FA Kart / Vortex / Vega) and Christopher Lulham (Tony Kart / Parilla / Vega) are determined to defend their luck to the end. There is no lack of outsiders to make the Races exciting, between the rookies and proven Drivers ​​in full recovery.

The verdict of the 2017 edition of the CIK-FIA Karting Academy Trophy will be revealed at the end of the Alahärmä Competition. The provisional ranking can be misleading as two out of six results must be counted (a Qualifying Heats and a Final) before knowing the big winner. Despite everything, Belgian Xavier Handsaeme seems to be progressing at all levels and has a good lead in terms of points against Dutchman Tijmen van der Helm. Frenchman Sami Meguetounif has recently moved up to 3rd place ahead of the initial leader, Dutchman Mike van Vugt and the promising Briton Joseph Taylor. For their final confrontation of the season, it is quite possible that we will see unprecedented exploitation of talent in the process of revelation.