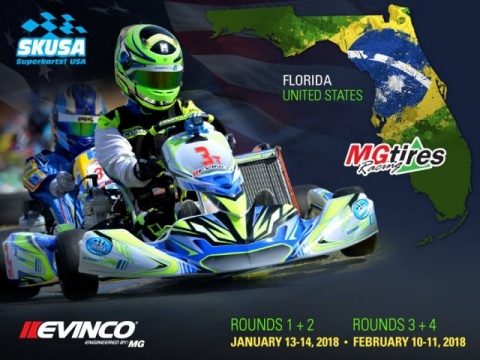 Author: Vroomkart International
As everybody knows, in the USA the karting environment is changing radically since MAXSpeed Group closed its business. Now the karting series are mostly divided by SKUSA and Rok Cup Promotion.
Last month SKUSA announced a new winter series and everybody was asking how they would be able to put on events at the same time. To ensure full grids for both series, they are actively discussing the possibility of working together on their scheduling. IAME and Vortex management are also involved, but too many cooks spoil the broth, and that’s led to some disagreement between parties.

SKUSA and Rok Cup Promotions would host their series on back-to-back weekends in January and February. MG Tires disclosed on Facebook the locations of SKUSA's two rounds: Homestead Karting is allegedly the first weekend (rounds 1 and 2) on January 11, followed by Ocala for the second weekend (rounds 2 and 3) on February 9-11.

We'll see if ROK Cup Promotions put up any resistance on those two locations or not. Anyway, it seems having these two series back-to-back will benefit just about everyone. Now it’s up to those in charge to finalize this agreement.