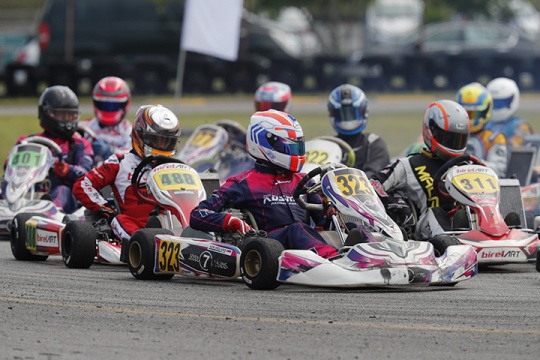 Press Release by: X30 Southeast Asia
Featuring a 1,145m track, high speed corners, and unpredictable weather, Shah Alam Circuit in Malaysia played host to 65 drivers for Round 4 of X30 Southeast Asia last weekend.
Established since the 1990s, the circuit is still as challenging for new and experienced drivers alike. Top drivers from across Asia came together to square off against one another – China, Singapore, Thailand, Malaysia, Philippines, India, Japan, Sri Lanka and Indonesia were all represented on track.

The cadet category formed the second largest grid over the weekend. With 17 drivers from 6 countries, the elite drivers of the region were all present.
All the cadets showed great pace and sportsmanship throughout the race. After 3 rounds in the championship, it was finally Cui Yuan Pu’s (AutoInc Racing – BirelART) time to shine. After a 5th placed finish in the Qualifying and a mixed performance in the Heats, Cui Yuan Pu started 6th on the Pre-Final grid. The Chinese national fought hard to gain 4 places, starting in the front row for the final race of the weekend.

In the Final, Cui battled race leader Christian Ho (I.S Racing – CRG) and overtook him in the 2nd lap. He then led the pack for another 6 laps, before being challenged multiple times by championship contender Yevan David (G51 Motorsports – Energy). Yevan David eventually finished a hair ahead, but was issued with a 5s fairing penalty, securing the win for the Chinese National. Also on the podium were Tiziano Monza and Yevan David from Singapore (1st and 2nd Runners Up) and Tasanapol Inthraphuvasak and Kittinat Lueangarunchai from Thailand (3rd and 4th Runners Up).

Championship leader Alex Brown (7 Racing – Kosmic), who had dominated the first half of the season, came out the gates storming. The Singapore national aced the qualifying and both heats on Saturday, with a perfect start to the weekend. However, the final phase saw a turn of events as an incident in the Final took the race leader out of the running, relegating him to a 7th placed finish. In the meantime, Amer Harris Jefry (I.S Racing – CRG), who had suffered a DNF in the Pre-Final and started the final from the back of the grid, climbed consistently throughout the race. After taking advantage of an incident in the first lap, the Malaysian driver gained 5 positions and began the hunt for his teammate and race leader Putera Adam (I.S Racing – CRG). The duo swapped positions numerous times before Amer Harris Jefry finally finished 0.1s ahead, cementing his position as Round 4 Champion. Also on the podium were Putera Adam and Nik Zamir from Malaysia (1st and 2nd Runners Up), Thanakrit Metheevuttikorn from Thailand (3rd Runner Up), and Oscar Ng from Malaysia (4th Runner Up).

As always, the Senior category was one of the toughest grids to drive in. 19 A-list drivers from around the region gathered to race at Shah Alam, with many of them holding prestigious National and Zone titles. Championship leader Prassetyo Hardja (Stratos Motorsports – OTK) spent the weekend defending his 5 point lead from Round 3 Champion Jason Burns (AutoInc Racing – TonyKart). Starting 3rd in the Pre-Final, Prassetyo Hardja showed steady and consistent pace. The Indonesian driver climbed a position with each lap, overtaking Jacob Ang (Petron Racing), teammate Romain Leroux (Stratos Motorsports – OTK), and race leader Jason Burns, resulting in an advantageous pole position on the Final starting grid.

The Final was a display of intense determination between the front-runners. Romain Leroux snatched the lead from Prassetyo Hardja at the start and held on to it for 4 laps, before relinquishing it to Prassetyo again in lap 5. Jacob Ang and Eshan Pieris (RL Karting – BirelART) battled fiercely for 4th place and swapped positions every lap, before the former suffered a DNF in lap 9 and finished off the podium as a result. Jarute Jonvisat (Maxima Motorsports), who had been in the middle of the pack throughout the weekend, had in the meantime gained positions consistently and swung into 5th place for his first podium finish of the season. The weekend ended with Prassetyo Hardja as Round 4 Champion and saw him strengthening his lead on the championship scoreboard, putting the Indonesian driver one step closer to the IAME International Final in Le Mans. Also on the podium were Romain Leroux from Singapore (1st Runner Up), Jason Burns from Singapore (2nd Runner Up), Eshan Pieris from Sri Lanka (3rd Runner Up), and Jarute Jonvisat from Thailand (4th Runner Up).

Round 4 marked the second meeting of the Super Shifter Category, utilising the 175cc X30 Super Shifter. The category has seen steady growth, with increasing participation every round. Newcomer Sasakorn Chaimongkol (CRG Thailand) led the Qualifying with a time of 51.567 seconds, followed by Nazim Azman (I.S Racing – CRG) who clocked in 2nd at 51.953s. Sasakorn Chaimongkol dominated the entire pre-final, with Nazim Azman behind him for the first 8 laps. In lap 9 of the Pre-Final, Nazim Azman was himself challenged by Chia Wing Hoong (Stratos Motorsports – OTK) who had risen from the back after winning battles with Brendan Paul Anthony (7 Racing – OTK) and Rahul Mayer (RL Karting – BirelART). Seeing an opportunity, Chia Wing Hoong overtook Nazim Azman on the 9th lap to start 2nd on the Final grid.

In the Final, pole-sitter Sasakorn Chaimongkol had a less than ideal start, dropping to 7th place by the end of the first lap. Undeterred, the Thai driver fought hard to make up for lost time, eventually finishing 4th on the podium. Meanwhile, Ong Chee Mang (Stratos Motorsports) who had started from the back of the grid overcame many difficulties to emerge 3rd. The weekend was eventually won by Nazim Azman, who started 4th and overtook the front runners to lead the Final uncontested. Also on the podium were Chia Wing Hoong from Japan (1st Runner Up), Ong Chee Mang from Malaysia (2nd Runner Up), Sasakorn Chaimongkol from Thailand (3rd Runner Up), and Rahul Mayer as 4th Runner Up.

The penultimate round of the Championship returns to Singapore once again on 29th and 30th July. Visit www.x30sea.com for more information.