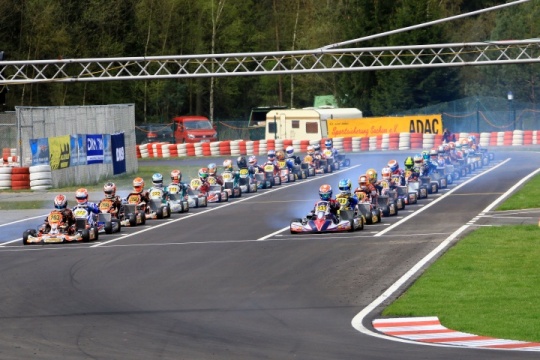 Press Release by: DKM
Filled up fields at the third racing weekend.
The first part of the Wackersdorf-brace awaits the participants of the German Kart Championship next weekend. The half-time champions are going to be chosen at the third event of the highest German kart racing series. The fields of the four grade series are strongly manned – the ADAC Kart Academy is also going to start within the framework.

The German Kart Championship reaches its half-time. After the first races in Ampfing and Kerpen things are now going to continue at the Prokart Raceland Wackersdorf. The interest is still high. All in all, 172 drivers are going to start in the grade series DKM, DJKM, DSKM and DSKC. The race track in Upper-Palatine belongs to the top spots in Europe and is also going to be the location of the Kart World Championship this year from September 8th – 10th.

The high popularity of the German Kart Championship also presents itself in the kart racing fans. The first races of the year were viewed by thousands of people via live-stream and the summary on the German automobile-, engine- and motorsports channel MOTORVISION TV. This time there are also going to be more than 15 hours of thrilling racing action. Eight track-, three onboard- and two mobile cameras are going to film all events in best HD-quality. The broadcast is going to start on Saturday from 10:45am and Sunday from 9:30am at www.kart-dm.de. The highlight magazine on MOTORVISION TV is going to be broadcast on July 23rd 2017 at 3:55pm.

Everything is still open in the championships after the first four ranked races. The lists of rankings are very closely together and promise exciting races. They are led by Lucas Speck (DSKC), Stan Pex (DSKM), Niels Tröger (DJKM) and David Schumacher (DKM).

DKM: Changing of the guard at the top class?

More than 40 drivers are going to start at the top class in Wackersdorf. David Schumacher (KSM Schumacher Racing Team) presented himself in top form so far. The son of former Formula 1- and DTM-driver Ralf Schumacher won the first three races of the season and is currently leading the championship with a small advance in front of his German team mate Felix Arnold (KSM Schumacher Racing Team). Reigning junior champion Dennis Hauger (CRG Holland) is getting closer too though. The Norwegian felt comfortable at the new class immediately and highlighted his ambitions in the Erftland with a victory and a second place. Glenn van Berlo (CRG Keijzer Racing) from the Netherlands also celebrates his DKM debut this season. The youngster has been among the top drivers since the beginning and is currently on fourth place. Reigning German Champion Paavo Tonteri (KSM Schumacher Racing Team) follows on fifth place.

The youngsters of the German Junior Kart Championship have shown narrow racing decisions so far. Hugo Sasse (CRG TB Racing Team) led the overall list of rankings after the kick-off in Ampfing. At the second event in Kerpen the Saxony-Anhalt resident didn’t achieve a perfect start and didn’t participate in the fight for victory. Italian Mattia Michelotto (Chiesa Corse) and Kas Haverkort (CRG Keijzer Racing Team) shared the victories in two narrow races. Sasse’s team mate Niels Tröger (CRG TB Racing) achieved the lead on the list of rankings: The CRG driver stood on the podium for the second time and has an advance of seven points on Sasse before the half-time event. Kerpen-winner Kas Haverkort follows on third place in front of Chiesa Corse-duo Hadrien David and Mattia Michelotto. The top five are currently only 33 points apart and promise exciting races in Wackersdorf as well.

A Pex is leading the rankings at the German Shifterkart Championship again. This time it’s not the five-time champion Jorrit Pex (CRG Holland) though, but his younger brother Stan. The young Dutchman won once in Ampfing and celebrated a double victory in Kerpen. His brother Jorrit follows directly behind him in front of Italian Flavio Camponeschi (CRG Germany). The kart world champion from 2012 drives his first season at the German Championship and started into the racing events in Ampfing with a victory. A falling out in Kerpen threw him back to third place on the list of rankings though. Italian Fabian Federer (SRP Racing Team) showed a steady performance with two places on the podium and is currently on fourth overall place. The best German is currently André Matisic (Solgat Motorsport) on fifth place. The start at the shifterkarts is thought of as a kind of position-fixing for the upcoming World Championship. Numerous international guest drivers are going to use the races as preparation.

The DMSB Shifterkart Cup is a great addition to the German Shifterkart Championship in its second year too. With 34 registrations, the cup is completely filled up and experienced four diversified races so far. Lucas Speck always drove among the front field and is currently leading the overall list of rankings before the races in Upper-Palatine. Close behind him are David Detmers (MSR Motorsport – WST Power) and Julian Müller (Mach1 Motorsport). Both of them celebrated a victory or double victory and promise a narrow fight for the title during the last six ranked races. Moritz Horn (CRG TB Racing Team) on fourth place and Jeroen Bos (CRG Holland) belong to the title favorites as well though.  The latter is only 22 points behind leading driver Speck.

The young drivers of the ADAC Kart Academy are going to start within the framework of the German Kart Championship again as well. After the kick-off in Kerpen, Tim Tramnitz (KSM Schumacher Racing Team) is leading the list of rankings – all in all 15 drivers are going to start at the next ranked races. The ADAC Kart Academy is said to be the stepping stone to kart racing. To guarantee equal chances, all participants start with homogenous chassis and engines. In addition to qualifying on Saturday, two races on Sunday await the rookies.