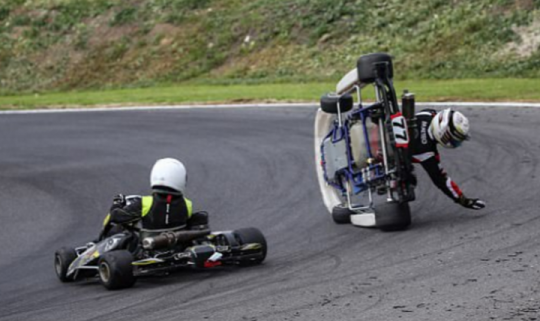 Author: Vroomkart International
In UK the 14 year old driver Emerson Harvey abandons a race and risks his life to rescue his 11-year-old opponent who was trapped injured under his kart.
First of all karting is a sport and the real value of it is sportmanship. Emerson Harvey knows it and for this reason he abandoned his kart to save his rival, Matteo. After seeing the younger boy roll his kart and end up underneath with his foot trapped in the throttle, Emerson stopped in the middle of the track. Because of this move Emerson was disqualified, but he doesn't care about that: his mate is ok, that's what matters.

'The engine's screaming, and I mean 14,000rpm, pretty scary and the wheels spinning,' Emerson's father Gavin Harvey, who witnessed the crash, said.
'There was fuel leaking out, it was a pretty scary situation for everybody.'

When asked about his cool-headed reaction, the young racing driver shrugged off his bravery and said he didn't think about the danger at the time. "I thought my friend was in a bit of strife, so I thought it'd be good to get him out."

Matteo escaped from the crash without serious injury, suffering from a fractured wrist. "He got three days off school so he's happy!" said Emerson.

Thanks to Simona Marchetti for reporting the news.