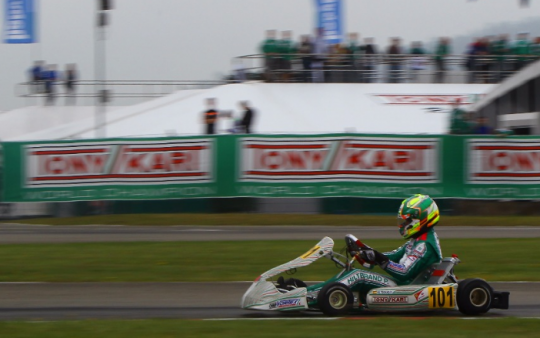 In OK class, we have three of our drivers in the top four positions, with David Vidales leader thanks to two third positions, Clément Novalak second position and Pedro Hiltbrand, winner of the recent round in Spain, who is fourth.

The race in Le Mans is the third round (out of five) and although we already showed a solid competitiveness of our drivers and chassis, everything has still to be decided and any distraction can be crucial to the final outcome of the championship.

The fourth driver of the Racing Team, Gianluca Petecof, will aim to confirm his professional growth, after a first stage of familiarization in the new OK category.
KZ2 class is led, after the victory of Genk, by our Matteo Viganó. Next to Matteo there will be Alessio Piccini and Jean Luyet, both with the credentials to get into the top fight.

In OKJ class, also at its third round, we will have Viktor Gustafsson, ready to enter the scoring area, as already happened in the opening event of the European Championship.

In order not to miss the exciting moments of the in Le Mans, our social pages will always be active and the live timing will show every stage of the competition. Also, Sunday finals (July 2nd) will be visible on CIK-FIA streaming channel.