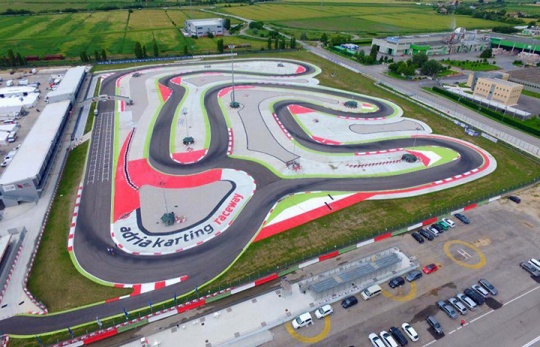 Author: Vroomkart International
The Italian ACI Karting Championship in Adria on July 16th for the fourth round of the season. Mirko Torsellini returns to KZ2 in Adria. All classifications still open ahead of the closing races of the season in Adria (July 16th) and Siena (September 3rd). KZ3 at the start too. The race will have coefficient 1,5.
The Italian ACI Karting Championship is getting ready for the fourth round of the season to be held at the Adria Karting Raceway (Adria, Rovigo) next July 14-16 with categories KZ2, 60 Mini, OK-Junior, ACI Kart, ACI Kart Junior on track. KZ3 classes KZ3 Junior, KZ3 Under, KZ3 Over will also be present for the second race after the opener of Sarno.


The round of Adria is certainly going to record a good participation following the success obtained so far especially in KZ2 and 60 Mini, but also due to the fact that the closing races will have coefficient 1,5. The presence in the first three rounds has been of 258 drivers in Lonato, 270 in Sarno (with the debut of KZ3 that saw 80 drivers on track) and 140 in Battipaglia.


MIRKO TORSELLINI BACK TO KZ2


In KZ2, Mirko Torsellini has announced his comeback after the great opener of Lonato. He is very motivated to close the championship on a high in Adria and Siena, as the Italian driver will get on track to test some new material ahead of the International 2018 season.


Category KZ2 sees Maranello Kart’s Marco Zanchetta on top, with a particularly competitive team mate Marco Pastacaldi fourth after the victory scored in Battipaglia. These two drivers will also have to face the challenge of Italian reigning champion Fabrizio Celenta on Praga-Tm run by Team LG Praga Italia, and that of Giacomo Pollini on Formula K-Tm by NGM Motorsport. Mirko Torsellini could also slide in the fight to make this title hunt even more interesting.


The young Sicilians currently have the upper hand in 60 Mini as Gabriele Minì (Parolin-Tm) is leading the Championship while Michael Paparo and Raffaele Gulizia, both on IPK-Tm run by Formula K Junior Team, follow him as the American Ugo Ugochukwu (Energy-Tm) who is third in the standings leading also Under 10 classification. Alfio Spina (CRG-Tm) is also ready to get important points, as Battipaglia’s race-1 winner Andrea Kimi Antonelli (Tony Kart-Vortex).

OK-Junior is speaking Russian as Alexey Brizhan is leading the charts on Tony Kart Vortex thanks to the double win scored in Lonato, but Luca Bosco is closing in on Tony Kart-Vortex, as Giuseppe Fusco on Tony Kart-Lke that won Sarno’s Race1 and both Battipaglia’s races. Leonardo Papalia on Tony Kart-Tm and Sarno’s race2 winner Francesco Pizzi on Luxor-Lke also showed good process. Compared to the full haul scored by Brizhan in Lonato, things will be trickier for rivals due to the halved score in Sarno and Battipaglia (as less than 15 drivers were at the start). The situation could be back to normal in Adria though, especially as the race has coefficient 1,5.


Francesco Pagano (Luxor-Iame) is leading the ACI Kart thanks to the victory in Sarno and Battipaglia, while Danny Carenini (Tony Kart-Iame) follows after the double win scored in Lonato.


KZ3 will get back on track in Adria after the great success in Sarno. The third and closing round of the series will take place in Siena on September 3rd, the closing round that will see all categories on track including KZ4.


The leader of KZ3 Under is Luigi Di Lorenzo (CRG-Tm) who won Sarno’s Race1, as Riccardo Melas (Sodi-Tm) and Simone Ragno (CKR-Tm) chase him equal on points in second place. Several protagonists are all set to emerge in this category as they have shown good things last year in Prodriver.


Roberto Profico (Sodi-Tm) is back to racing in KZ3 Over after a few years of absence and has displayed good speed taking the victory in Sarno’s Race1 and the lead of the championship with it. Andrea Tonoli (Maranello-Tm), twice on the podium, and Claudio Tempesti (CRG-Tm), who won Race2, are his main rivals at the moment.


The other classifications of the Italian Championship:


All classifications are available at www.acisportitalia.it.