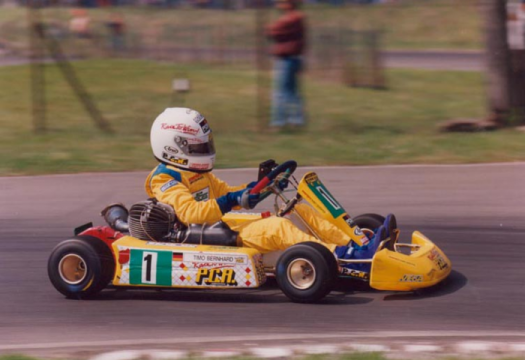 Author: Vroomkart International
Porsche secured its 19th Le Mans 24 hours, the third win a row, with the 919 Hybrid #2 driven by Timo Bernhard, Brendon Hartley and Earl Bamber. Let's make a step back to their days in karting.
written by Alessandro Roca.

A long stop in the box during the fourth hour to replace a front-axle motor and everything seemed to be wasted. They tried to recover the situation and they did it. The Porsche #2 equipment took home the third win for the Stuttgart-based company thanks to the retirement of their rivals, but this is the 24 hours of Le Mans.

As almost each professional driver, they started from karting, so we went through their times in karting.

At the age of ten, German racing driver Timo Bernhard won his first title in junior slalom karting. It was the first of a long list! At the top of that list are his victories in all of the world’s biggest sports car endurance races: 24 hours of Le Mans, 24 hours of Daytona and the 12 hours of Sebring. At the Nürburgring he has claimed the overall victory in the 24 hour race five times. Nowadays Timo is an integral part of Porsche’s Le Mans LMP1 project since 2013.

“It has been amazing, I’ll never forget this day! We put so much effort in this project. Win the 24 hours of Le Mans with a Porsche has always been one of my dreams since I started racing as Porsche’s junior driver. The last lap was really special for me, it brought up so many memories that I couldn’t hold back tears. The first laps in karting with my parents jumped out at me, it’s the first time that I cried after a win. I just got carried away from emotions…”

Where did your interest in motorsport come from?

"The interest in motorsport came through my father who was a racing driver himself but for him it was only a hobby. I’ve been to motorsport events from a very early age, I was only 6 months when he took me to a hill climb! I was passionate about motorsport from a very early age. I remember telling my father’s friends when I was 5 that I also wanted to be a racing driver but unlike them, I’d like to get paid for it…"

How old were you when you started in karting?

"When I was 9 we heard of the possibility for me to do Karting. I just turned 10 when I started in Kart slalom around cones. It was a good training and I won the regional Championship straight away. We quickly switched to “circuit” Karting, but in Germany at that time racing was only allowed at the age of 12, so I had to do one year of training only and no races."

What was your best memory in karting?

"I have a lot of great memories in Karting, it’s been such good training. The highlight for me on a national level was to clinch the ONS German Junior Karting Championship. Internationally it was finishing 5th in the CIK- FIA 5 Continents Cup (World Cup for Juniors) at Braga. I was leading after the start and suffered a slow puncture but it was still a great success."

What are the qualities of this discipline?

"First of all as a young driver you start just for fun and for me that’s the base of it all. Once you feel that this could become your life you have to step it up. The key is to learn all the basic skills in Karting which you need later in Motorsport such as racecraft, setup, rules, racing lines and so on at a young age. I also enjoyed measuring myself against all the other young talents in Europe and on an international level. It is better in Karting than in some other Motorsport disciplines and boosts the learning process. I think the great thing for young girls or boys in Karting is that they learn to measure themselves against others, to focus on a goal, sportsmanship and, above all, to enjoy something. My son is 17 months old now and if he wants to take the same path in the future I will certainly try to give him the same support that I had from my dad."

Brendon Hartley was born into a racing family in New Zealand. He started with go-karts at the age of 6, inspired by his father Bryan, who drove in various racing series. Brendon’s older brother Nelson, named after Nelson Piquet, was already ten when Brendon was allowed to join him for the first time. His older brother was faster, and Brendon still remembers the sleepless night that followed. “That was when I realised that I can’t lose. I want to win. In everything I do.”

Brendon Hartley grew up in Palmerston North on the North Island – he launched into formula racing. After a series of wins in Formula Ford amongst other series, it was soon evident that he had the talent to make a career from racing, but lived at the wrong end of the world. At the age of 16 he leapt in at the deep end – Europe. He took up quarters in the east of Germany and raced in a two litre Formula Renault in the German and European Championships. In 2007 he won the World Series by Renault, a win that would become a defining time for him in a foreign country. He joined the Red Bull talent pool and worked hard. “It’s quite simple, if you don’t put the effort in, nobody is going to invest in you. I couldn’t have gone on without it. There was a lot of pressure, but most of it was from me anyway.”

Hartley won four consecutive Cadet class titles in the local WPKA Gold Star series. He then took advantage of MotorSport NZ's Junior Driver Licence which allows suitably qualified youngsters to race cars from the age of 12. He continued to race a kart through his teenage years as time allowed, however, being one of a group of karters from Palmertson North Boys High to win the National Schools Championship title in Taranaki in 2005.

After a good career in single seater series, he had a Formula One contract up to and including 2013 – first as a tester for Red Bull Racing, and then for the Mercedes AMG Petronas Formula 1 Team. His simulator work was highly regarded, which the F1 teams used to cushion the restrictive test requirements. But a racing driver has to race. In 2012 he started his second career as a long distance racer. European Le Mans Series, Grand Am, 12 hours in Bathurst, 24 hours in Daytona and in Le Mans are races he has had under his belt for some time now. “There are so many great races left”, he says. “I am open for anything with four wheels and an engine. But my goal and hope was that one day I would attract the attention of a manufacturer. The fact that it is Porsche, the most successful brand at Le Mans – it’s a dream come true.” The 24 hours of Le Mans is the most emotional race in the world for him: “It’s an emotional rollercoaster – I’ve never seen so many grown men with tears in their eyes.” Now he is one of those crying men...

With Hartley on the highest step of the podium there was another Kiwi driver: Earl Bamber. He started racing at the age of eight, competing locally first then moving further afield, winning the North Island Junior Restricted 100cc Yamaha title at Hamilton in 2002 and the New Zealand Junior ICA title at Auckland in 2004. That year the then 14-year-old also won the Junior class in the multi-round Rotax Max Challenge, and went on to be the first New Zealand driver to claim a podium spot (third) at the Rotax Max category's annual Grand Final (where winners of the National Challenge series from 33 countries competed against other) held at Lanzarote in the Canary Islands in January 2005. Then he progressed through to single seater series culminating in a championship win in the 2006 Formula BMW Asia.
​
Following that, Earl achieved pole positions, fastest laps and podium results in Formula Renault V6 and the Australian Formula 3. He then won the 2007- 2008 Toyota Racing Series international championship en route to finishing runner-up in the overall championship. Bamber also won the coveted Lady Wigram Trophy by virtue of winning the celebrated Wigram Airfield race and was subsequently awarded the Steel Trophy for his outstanding achievements as a junior driver in New Zealand in 2008. The young Kiwi capped off a stellar season as the runner-up of the Formula V6 Asia Championship.

Bamber was then selected as Team New Zealand’s junior driver in the 2008 A1 Grand Prix series. The following season, Earl was promoted to the leading driver seat and finished on the podium three times. He also stood on the podium in GP2 Asia, at the age of 19. In 2010, Earl fulfilled a childhood dream in winning the New Zealand Grand Prix and went on to repeat his earlier
success by once again being crowned the runner-up in the New Zealand Toyota Racing Series. After being crowned Porsche Carrera Cup Asia champion in his debut season in 2013, Earl Bamber was nominated and chosen as the winner of the prestigious Porsche Motorsport International Cup Scholarship.
​
As a Porsche Cup Scholar, Earl was afforded the financial impetus to compete in the Porsche Mobil 1 Supercup in 2014. He finished the season as the first ever rookie to win the Porsche Mobil 1 Supercup whilst concurrently defending his Porsche Carrera Cup Asia title. Earl then made his debut for the Porsche factory squad at the 2014 Petit Le Mans where they finished second at the iconic ten hour endurance race consequently securing the manufacturer’s championship for Porsche North America.