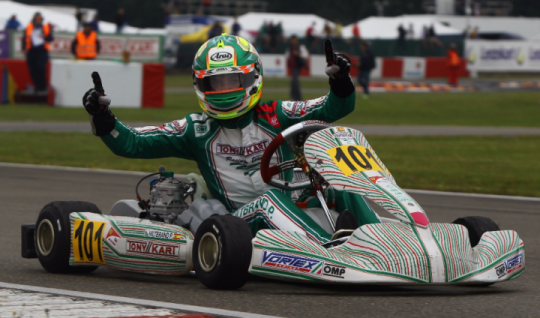 Press Release by: Tony Kart Racing Team
On the occasion of the CIK-FIA European held on the Alonso track the DDS collects success in OK.
On the occasion of the CIK-FIA European Championship held on the Fernando Alonso track, the DDS engine collects a good success in OK final and the first place in the championship. In OKJ class, the standing is led by a driver running with a Vortex engine, DDJ. The RKZ holds the second position, with Hajek, in the absolute standing of KZ category.

Vortex, with the DDS, has not only won the final in OK class, thanks to the success of Pedro Hiltbrand (Tony Kart Racing Team). On the third step of the podium we also find David Vidales, teammate of the Spanish driver. Not only: the DDS also won the absolute pole position (56 registered drivers) in qualifying thanks to Noah Milell (Kosmic Kart Racing Department) taking the lead of the championship standings, always with Vidales, first of the 8 drivers "powered By Vortex DDS "in the top ten list. Finally, 5 are the Vortex victories out of a total of 10, while by far the majority of the Vortex engines (19 out of 34) has reached the final after the demanding heats

In this European Championship, Harry Thompson (Ricky Flynn Motorsport) is the most noticeable driver with the Vortex DDJ engine. Thompson in Spain won three heats, signed the pole and got on the podium with third place. The excellent score of the results gained, since the first European Championship round, allowed the English driver powered by Vortex DDJ to take command of the championship standings. OTK Group engines quality are very well confirmed, even in this case, by the number of engines in the top ten list, i.e. not less than 44% of DDJ engines were lined up at the starting grid of the Spanish final.

In the shifter class, the Vortex engines were under the spotlight and allowed significant performance to the drivers employing them.
In the third round of the European Championship, it was the RKZ signing the best lap of both final and event, thanks to Patrik Hajek (Kosmic Kart Racing Department).
Hajek himself takes the second place in the championship standings, with just one race to go.