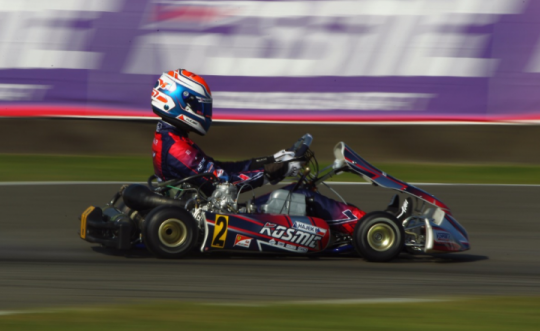 The second round of the CIK-FIA European Championship began very well in OK class, with a formidable pole position gained by Noah Milell and a top performance of our Swedish driver. The result of such performance meant Noah's second position in the final starting grid. And it was just the final which reserved a disappointment, as Noah, after a good start on the slippery track, was stopped by a collision. Our other drivers Mazou and Basz got good scores, finishing ninth and twelfth. Pourchaire, after his success gained on the occasion of the first European competition, had a tough weekend in Spain. Despite this, our driver is third in the standings and has very good chances to win the title in the next three appointments.

In KZ class, at the end of a very hard final, except in the central stages, Hajek finished fourth, failing to complete the recovery of the third-place. Patrik's intense running towards the podium saw our driver signing the best lap time of the race and of the event twice, with a formidable 56.067. Patrik holds the second place in the overall standing one round to the end and Simo Puhakka, gaining good scores in Spain, too, is currently eighth.

Roman Stanek, in OKJ, performed a great comeback in the final from the 14th to the fifth position. Roman's performance unfortunately was stopped due to an accident occurred in the fight for the podium.

Now the Racing Department's race calendar will see us engaged in the first weekend of July in Le Mans (France), for the third round of the European Championship in OK and OKJ and second for the KZ2 class.
Fatal error: Cannot redeclare class XMLSitemapException in /home/multidb/public_html/sites/all/modules/xmlsitemap/xmlsitemap.xmlsitemap.inc on line 8