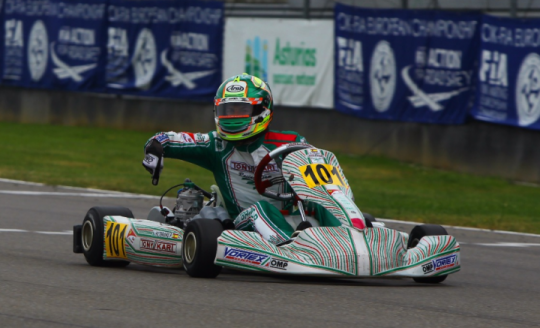 OK. On the golden book of the first international race run on the Fernando Alonso track the great success obtained by our chassis and drivers will remain indelibly impressed. This was possible thanks to the performance of Pedro Hiltbrand who soon took the lead of the race, when the asphalt was wet by a tricky rain. Indeed, the final was postponed because of the wet ground, to avoid dangerous situations, as drivers mounted slick tires. At the new start was still Pedro setting the tone, going straight to the success without problems and reaching fourth place in the overall rankings. Just the championship standings are led by our drivers, David Vidales and Clément Novalak, respectively, with David climbing to the top positions thanks to the points gained, thus obtaining a good third place in the race held on the Alonso track, too. Also the European opening race in OK category, run in Italy on the Naples circuit, was won by our drivers, absolute protagonists, with Novalak first and Vidales third place.

The OKJ cadet class saw our technical material always at the top with the teams employing Tony Kart material. The young Racing Team driver, Viktor Gustafsson, tried for a difficult recovery after the forty-second place in qualifying. Unfortunately, his entry in the final was not possible.

In the shifter category, KZ, the only Racing Team's driver, Luca Corberi, ran in the top positions in two out of three heats and in the final he took the seventh in the early stages. A collision took our driver to the rear and the damage did not allow him to recover. However, Luca got precious scores in the Iberian race, allowing him to enter the provisional top-ten list.
Fatal error: Cannot redeclare class XMLSitemapException in /home/multidb/public_html/sites/all/modules/xmlsitemap/xmlsitemap.xmlsitemap.inc on line 8