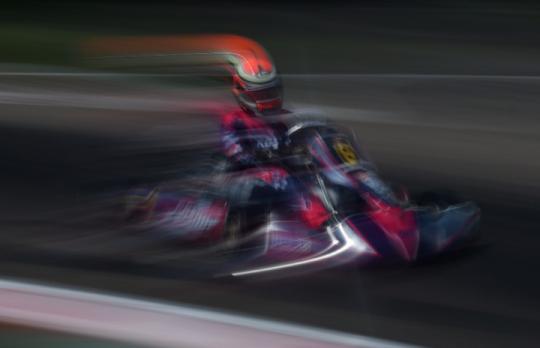 After the success obtained in the opening race of OK class, Théo Pourchaire is currently the leader in the rankings. Théo will be under watch during the round of this weekend, valid as the second race (out of five) of the European category.

Not far from the top positions is also Karol Basz (4th) and Noah Milell (7th). The very good positions taken by our drivers perfectly reflect the technical quality of the material they employ, with the Mercury S chassis powered by Vortex engines that have proven their formidable qualities.

Among the possible protagonists of the Spanish round we have the other our two drivers, Daniel Vebster and Hicham Mazou, ready to recover after the unlucky debut in Sarno (Italy).

In the shifter class, Patrik Hajek and Simo Puhakka performed at excellent levels, both in Italy and in Belgium, and are aware of the technical material they have at their disposal. With both drivers, we expect to gain the top positions, taking advantage from the technical potential as well as human skills. The Alonso circuit, still to be discovered, will have to be attacked by ours to try to recover good scores that can allow us to fight for the success in the final race, scheduled at the end of July in Sweden.

The twelfth position in the ranking taken by Roman Stanek in OKJ does not perfectly reflect what was shown in the opening round of the European Championship. Aware of this, on the Alonso track we will do our best to further improve and take us to even higher positions in the ranking.

All stages of the Spanish race can be followed by the official live timing and the finals will be available thanks to the live streaming on the official CIK FIA website at www.cikfia.tv