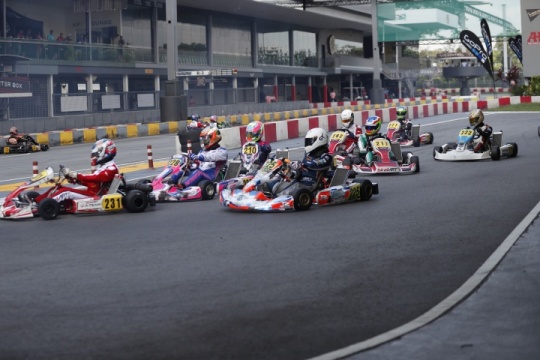 Press Release by: X30 Southeast Asia
It was back to Singapore again for Round 3 of X30 Southeast Asia. The race took place last weekend at KF1 Karting Circuit in Singapore. Known for its highly technical 18 turns, KF1 Karting Circuit is unforgiving and offers no room for mistakes – especially not among such a competitive grid.
2017’s dry streak continued as the championship was met once again by the blazing sun. Under the scorching heat, 68 drivers from all over the region gathered to fight for championship points.

All drivers were equally driven to win, and for good reason - for the Juniors and Seniors, the road to victory ends in €10,000 of Arrive & Drive packages to the coveted IAME International Final. On the other end of the spectrum, Masters and Veterans continue to battle it out for 911 Cup Car testing sessions.

The cadet category formed the largest grid over the weekend, fielding 22 promising drivers from Singapore, Philippines, Thailand, China, Indonesia, and India.
With highly experienced drivers among the field, the cadets filled the weekend with intense competition and racing action.

After his recent hospitalisation, Singapore’s Yevan David (Energy Corse Asia – Energy) put in an incredible performance. Yevan David’s consistent pace pushed him to pole position in the Pre-Final, followed by an eventual 3rd on the podium after a front fairing penalty.

The position for race leader was contested hotly throughout the weekend, with several racing skirmishes and multiple position changes.

Akshay Bohra (I.S Racing – CRG) began the weekend with a risky 8th in Qualifying and 10th in Heat 1, but after a hard fought weekend pulled through to claim the title of Round 3 Champion.

Alex Brown (7 Racing – Kosmic) set the pace for the junior category with a qualifying time of 46.038s. The Singaporean driver continued to dominate throughout the Heats, clinching pole position for the Pre-Final.

In Sunday’s Pre-Final, a reshuffle as the pack rounded the first corner placed Brown in 3rd and behind the race leaders. Out of the disorder emerged teammates Amer Harris Jefry and Putera Adam (both of I.S Racing – CRG), who led the race for the first few laps.

Showing great consistency and patience, Alex Brown made his move one turn at a time, overtaking Putera Adam in the 2nd lap followed by Amer Harris Jefry in the 4th lap, for an eventual 1st placed finish in both the Pre-Final and Final.

In the Final, podium contender Putera Adam started 2nd on the grid but dropped to 8th after a collision with Bianca Bustamante (AutoInc Racing – BirelART). Bianca Bustamante, who started 4th on the grid, also suffered a mechanical issue and did not finish as a result.

Capitalising on the opportunity, Amer Harris Jefry and Nik Zamir (I.S Racing – CRG) swung ahead and had a battle of their own, swapping positions every 2 laps.

Eshan Pieris (RL Karting – BirelART) was the talk of the race after setting the pace with a qualifying time of 45.682. Throughout the weekend, the Sri Lankan continued to dominate, drawing a horizontal line at the top of the lap charts for the Heats and Pre- Final.

In the Final, Eshan Pieris continued to lead at the front until a dropped chain in the last lap siphoned all power from the engine, resulting in an unfortunate DNF and a collective cry from the spectators’ stand.

Romain Leroux (Stratos Motorsports - OTK) and Jason Burns (AutoInc Racing – TonyKart), who had been tracking behind the race leader, swung around the stranded kart and into the last few turns of the Final.

In the moment of mayhem, Jason Burns displayed magnificent race-craft and made a move on Romain Leroux in the final few corners, finishing 0.303s ahead for a first placed finish.

In the Master category, Round 1 Champion Brendan Lim (Arina Racing – OTK) had a bad start to the weekend. Despite qualifying 3rd, the Singaporean driver suffered a DNF in Heat 1 and as a result began the Final Phase near the back of the grid.

After a good start in the Pre-Final, Brendan Lim fought his way up the grid, finishing 2nd (1st in class).

In the Final, Brendan Lim continued to make up for his bad start, fighting behind the race leader Jeremy Lee (AutoInc Racing – BirelART) before overtaking him in the 4th lap to finish first and on top of the Championship Standings.

Round 2 Champion Ang Kok Wee put in an equally impressive performance to finish 2nd in the Final and on the podium.

In the Veteran category, Jeremy Lee dominated throughout the weekend, achieving a perfect result in his Singapore home- ground and widening his lead on the Championship scoreboard.

The next round of X30 Southeast Asia will take place at Shah Alam International Kart Circuit in Malaysia on 8 and 9 July 2017. More information on www.x30sea.com.