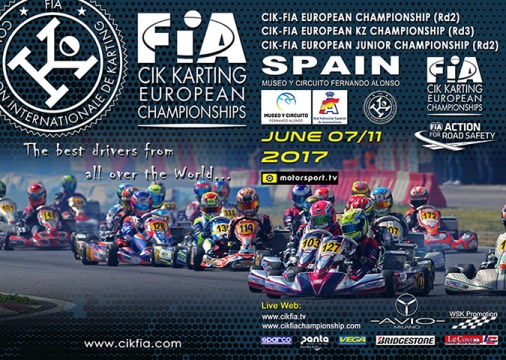 Press Release by: WSK
The CIK-FIA European Championship moves to Spain, to the Fernando Alonso Circuit set in Asturias for its third event, scheduled from 8th to 11th June with the categories OK, OKJ and KZ.
THE EUROPEAN CIK-FIA KZ, OK AND OKJ CHAMPIONSHIP IS BACK TO SPAIN.

The European CIK-FIA Championship is back on track in northern Spain, on the Asturian circuit owned by the Alonso family. The modern facility near the town of Oviedo is hosting, from 8th to 11th June, the second out of five rounds of the OK and OK Junior categories, together with the third and penultimate round of the KZ. For the first two categories, the race is going to be the occasion to better define the values of drivers and teams after the season-opener in Sarno in mid-April; on the other hand, KZ is at its halfway point, just before the fourth and final round to be held in Sweden at the end of July. The 169 entrants to the Spanish race are going to challenge each other on a circuit at its debut in a CIK-FIA race. Many drivers are going to race on the 1,390 metres of the track of La Morgal for the first time: a further element which is going to make the final outcome of the race absolutely unpredictable.

THE RACE ON VIDEO.

In Spain, too, WSK Promotion will stream live the races on the web-channels cikfiachampionship.com and cikfia.tv. The streaming will start at 10am on Sunday 11th June with the last qualifying heats; then the drivers’ parade and the Finals of the three categories will follow. The TV channel Motorsport.tv will air the special TV report in the following week.

ALL THE FRONTRUNNERS IN THE THREE CATEGORIES.

The reigning world champion, the Italian Paolo De Conto, is the unbeaten KZ leader, after his victories in Sarno and Genk. His closest pursuers are the Dutch Stan Pex (both on CRG-TM-Bridgestone), the Czech Patrik Hajek (Kosmic-Vortex), the French Anthony Abbasse and the Dutch Bas Lammers (both on Sodi-TM) all ready to attack. The Italian Marco Ardigò (Tony Kart-Vortex) is looking for payback: the 2016 European Champion was rather unlucky in the first two rounds. There are lots of frontrunners in OK, beginning with the French Theo Pourchaire (Kosmic-Vortex-LeCont), leader after gaining all the available points in Sarno. Behind him, in close pursuit, the English Clement Novalak and the Spanish David Vidales (both on Tony Kart-Vortex), then the Polish Karol Basz (Kosmic-Vortex). In OKJ, the leader is the English Jonny Edgar (Exprit-TM-Vega), who will need to hold back the Brazilian Gabriel Bortoleto (CRG-Parilla) and the two English Harry Thompson and Zak O’Sullivan (both on FA Kart-Vortex), all separated by very narrow gaps.