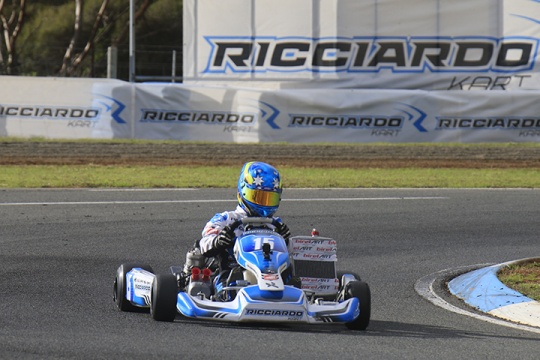 Press Release by: Karting Australia
The third round of the Australian Kart Championships welcomed a number of new faces to the podium, whilst some old favourites made a welcome return to the podium.
Scuderia PCR Australia’s Kyle Henry-Smith took his first AKC win in KA1 - it was the first win in 20 years for the Italian chassis in the category (or equivalent). The Gold Coast-based New South Welshman waited until just over one lap to go to make the decisive move on Scott Sorensen.

The HDR Arrow Karts driver had led the majority of the race before rain started to fall on the Monarto circuit. Superb slick tyre wet driving allowed Henry-Smith to close the gap to the point where he could make the pass on Sorensen to take the win. Daniel Edmonds came home in third position.

18-time Australian Champion, David Sera made a welcome return to the podium in X30. After winning the Australian KZ2 Championship last year, Sera has elected to use X30 as a development platform for his ‘Deadly’ chassis. After issues at round one and developments at round two, he finally looked comfortable at Monarto. He came home a narrow third in what was a terrific battle up front.
FA Kart driver, Justin Francis was able to secure the victory after charging to the lead on the opening lap. He was pushed a lot of the way by West Australian, Ben Harders also in an FA Kart.
KA2 Championship leader, Lachlan Hughes was able to salvage poor heat race form to maintain the lead margin he came into the round with after a masterful performance in his Ricciardo Kart.

Queenslander Hughes lost the Title lead to Broc Feeney after a disastrous heat four. He would enter into a fascinating battle with Feeney and the pair of Tasmanians - Tate Frost and Lachlan Dalton.  Once he got to the lead, the round one winner pulled away, emphatically winning the final by over five seconds from Frost - the first Tasmanian to stand on the podium in the elite Junior category - and Christian Pancione - the Victorian making it two FA Karts to Hughes’ Ricciardo on the podium.
Feeney dropped back to sixth at the end of the race, citing carburettor issues - ironically the issue that Hughes had been suffering through Saturday.

In TaG 125, Cody Gillis walked away with the win and his first AKC round win. Gillis had been the head of the field all weekend long and looked very strong once again.
He was challenged late in the race by Kody Garland who made significant ground after starting deep in the pack, however Garland was stung with a post race penalty which dropped him down the order. This elevated Victorian Paul Rodgers to the second place. The SellKarts.com driver has been among the front runners for the last couple of seasons and a podium was just rewards for him. Kris Walton battled hard with the likes of Championship front-runners Joshua Car (CompKart) and defending Champion Brendan Nelson (FA Kart) to secure the third placing.

In KZ2 - rain descended on Monarto just prior to the gate being opened for competitors. This sparked a flurry of discussion before the race, however all drivers elected to remain on slick tyres. With all on dry tyres on a wet racetrack, it delivered a fascinating race. In the end, South Australian Daniel Price crossed the line first, however he was later excluded for a nosecone violation, thus handing the race win to his CRG Australia team-mate Jason Pringle. The decision by officials also pushed Garry Rogers Motorsport Supercars driver, James Golding to second position. The Victorian, driving a Formula K chassis won the battle of the Supercars drivers - with Nick Percat coming home in seventh position after an early race skirmish with Jason Faint’s JC Kart and Macauley Jones who didn’t finish, but did manage to lock horns with Percat - his Brad Jones Racing stablemate throughout the race. Pierce Lehane finished third.

Shamick Racing’s James Wharton won the Cadet 12 class ahead of Marcos Flack and EVO Kart’s Adrian Haak who greeted the chequered flag line astern. Just 0.088 separated the three of them at the finish line.

The trio all had turns at the lead of the race, but it was Championship leader Wharton that wouldn’t be denied come the end of the race.

After a difficult weekend in Cadet 9, defending Australian Champion Ryan Tomsett delivered the goods on Sunday afternoon. He hadn’t been anywhere to be seen throughout the course of heat racing but come the final, he won the race by a comfortable margin.

Toby Dvorak who was at the point during two of the three heat races yesterday came home in second place, whilst Emerson Vincent had to negotiate his way from third deep in the pack after being subject to numerous infringements during his heats.

Another defending Champion in Cooper Webster staged one of the best fightbacks of the day in KA4 Junior. Whilst arch rival Jay Hanson and Kai Allen held a two second advantage over him, a late race skirmish between them opened the door for Webster to fight back.

He took the opportunities presented to him and stormed through to take a narrow race victory over Hanson and Allen - who up until that point had been dominant.
Defending Australian Champion Matthew McLean took his Arrow to victory in KA3. The long-haired Victorian took his first round win of the year and extended his Championship lead after an amazing race with James Sera. The pair traded blows, which gave a sniff to Leigh Nicolaou - however Nicolaou drifted too far backward to offer anything to the two up front come the end of the race.

Thus brings to a conclusion the third round of the Australian Kart Championship presented by Jayco and Castrol EDGE. It was one that had huge Championship implications for some people and promises an exciting event when the Championship visits the wide and flowing Emerald Raceway for the penultimate round over the weekend of July 21-23.