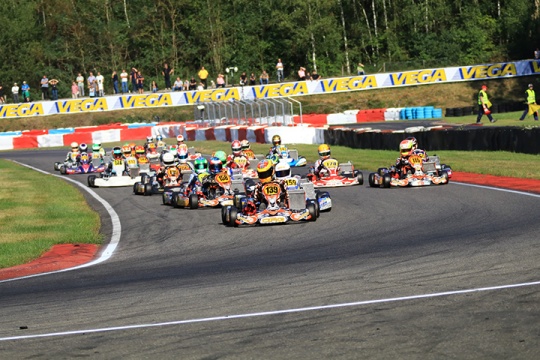 Press Release by: DKM
After a thrilling season kick-off in Bavarian Ampfing the participants of the German Kart Championship are now going to travel on to Kerpen. On the traditional Erftlandring more than 160 drivers from more than 20 nations are going to start next weekend. Diversified races can be awaited in all four classes. The weekend is again going to be accompanied by an extensive live stream.
It’s a record year at the German Kart Championship. With more than 140 firmly registered drivers the four grade series DKM, DJKM, DSKM and DSKC are met with high interest. The Erftlandring in Kerpen provides a traditional backdrop for the second racing weekend. The traditional track saw the first motorsports steps of Formula 1 record World Champion Michael Schumacher as well as four-time Formula 1 Champion Sebastian Vettel. The participants of the German Kart Championship want to tie in with this.

After an exciting kick-off in Bavarian Ampfing, David Schumacher (KSM Schumacher Racing Team), Hugo Sasse (CRG TB Racing Team), Flavio Camponeschi (CRG Deutschland) and Julian Müller (Mach1 Motorsport) are going to start in Kerpen as the leading drivers. The ADAC Kart Academy is represented for the first time. The young talent series of the ADAC is going to celebrate its premiere with 15 youngsters.

Kart racing fans can expect a full program again. The online live-stream is going to start broadcasting on Saturday from 10am and on Sunday from 9am and is going to show the entire racing action. Eight track-, three onboard- and two portable cameras are going to deliver more than 16 hours of live images in HD quality. Whether at home or on the road – kart racing fans can experience the German Kart Championship in high quality on their TV, PC, mobile phone or tablet. Additionally, the automobile-, engine- and motorsports channel MOTORVISION TV is going to show a highlight-magazine about the races in Kerpen on June 11th at 3:40pm.

Are there going to be new winners in Kerpen?

David Schumacher (KSM Schumacher Racing Team) is going to start in Kerpen as the beaming winner and preliminary DKM league leader. The youngster knows the 1.107m long track very well and is among the favorites again this time. His competition is very close by though. Closest is reigning German Champion Paavo Tonteri (KSM Schumacher Racing Team) from Finland. He didn’t achieve a victory in Ampfing, but wants to change this in Kerpen. Next to him Kilian Meyer (CRG Holland), Luca Maisch (CRG TB Racing Team), Tim Tröger (CRG TB Racing Team) and Glenn van Berrlo (CRG Keijzer Racing) are also among the favorites for the front positions.

DKM-patron Sebastian Vettel won the German Junior Kart Cup in 2001 and thereby set the basis for his successful motorsports career. 48 juniors are going to start in Kerpen and have a similar goal. Hugo Sasse (CRG TB Racing Team) showed the best performance of the regular drivers in Ampfing. The newcomer left the experienced competition behind and led the championship. At the kick-off, the youngsters impressed with balanced races. During qualifying, the front 30 drivers were less than half a second apart – a repetition of this could happen in Kerpen. Sasse’s strongest opponents are going to be Luigi Coluccio (KSM Schumacher Racing Team), his team mate Niels Tröger (CRG TB Racing Team), Marius Zug (rl-competion.com) from Germany as well as the Zanardi Kart-duo Hadrien David and Leonardo Marseglia.

The leading drivers of the German Shifterkart Championship Flavio Camponeschi (CRG Deutschland) and Stan Pex (CRG Holland) are only three points apart. The two brand colleagues shared the race victories between them in Ampfing and took the preliminary lead. Stan Pex has especially ambitious goals this season. After his brother Jorrit Pex (CRG Holland) won the Championship for the fifth time last year he now wants to end up at the top. That’s not going to be easy though: Next to his brother, Fabian Federer (SRP Racing Team), Rick Dreezen (KSW BirelART Austria Racing Team), as well as Germans Alexander Schmitz (CRG Holland) and Daniel Stell (Mach1 Motorsport) showed impressive performances at the kick-off as well. Max Tubben (CRG Holland) celebrated a strong debut too: The reigning DSKC Champion doesn’t show any acclimation problems in the new class and is on the strong seventh position on the overall list of rankings.

The “second league” of German shifterkart racing is completely filled up in Kerpen again as well. The field of participants at the second event consists of 34 drivers – new as well as experienced ones. Julian Müller (Mach1 Motorsport) and Lucas Speck (LS Kart) are going to start in great moods: The Erftlandring is both of their home track and they have accordingly high ambitions. Next to the two experienced shifterkart drivers, the two newcomers Alessio Curto (Beule Kart Racing Team) and Luka Kamali (SRP Racing Team) impressed at the kick-off as well. The duo is driving their first year at the DSKC and was among the front field right away. They are going to have to repeat their good start in Kerpen to be able to fight for the championship in the end.