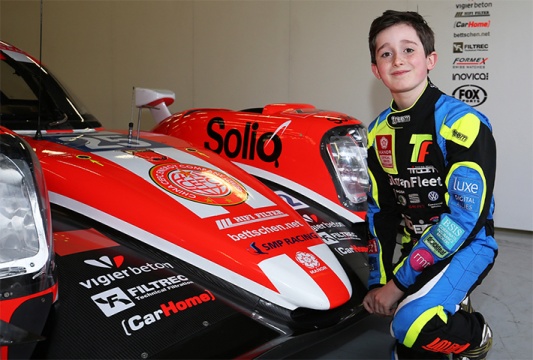 Author: Vroomkart International
It's not a news: F.1 is not the only one goal for kart drivers.
We've seen the Lamborghini Driver Kart Program which joined DR Racing Team to select and grow the next GT drivers and we've dedicated one page in our last issue (#Vroom 191) to Karol Basz and Glenn Van Parijs, two kart drivers ready to step up into GT cars, not to mention all those driver programs for F.1 teams...

But now there is something new: young Newcastle-born Joseph Taylor is the first driver to be signed to the Manor Official Driver Programme.

Manor is racing in the 2017 FIA World Endurance Championship and the legendary 24 Hours of Le Mans under the new Chinese banner of CEFC Manor TRS Racing. The racing team, which includes two ex-F1 drivers, Vitaly Petrov and Jean-Eric Vergne, will race with two ORECA 07 Gibsons in the 2017 Championship.

Graeme Lowdon, who lives in Corbridge, Northumberland, and is President and Sporting Director of Manor, explained that the Manor Official Driver Programme is a new way to guide young, talented drivers through a difficult business, providing them with a route map to better understand and cope in a tough environment. During 2017 Joseph will receive guidance and assistance on developing his driving career and gain access to the Manor team and the environment at some endurance races.

“A big part of the Manor programme is spotting talent at an early age, that is something we think is really important. Motor sport is such a difficult business“ he said.

Joseph was introduced to the Manor team and watched their performance at Silverstone over the Easter weekend for the 6 Hours of Silverstone endurance race.

Coinciding with the national recognition from Manor, Joseph is one of two UK representatives nominated by the Motor Sports Association to take part in this year’s CIK-FIA Karting Academy Trophy series, which will see him racing in Finland, Belgium and France.

Last year Joseph met Lewis Hamilton to be officially recognised for winning the 2015 Formula Kart Stars – Cadet series. Lewis won the same championship in karting as Joseph back in 1995, and at the same age, 10. Lewis went on, breaking many milestones, to become one of the youngest F1 champions at the age of 23.