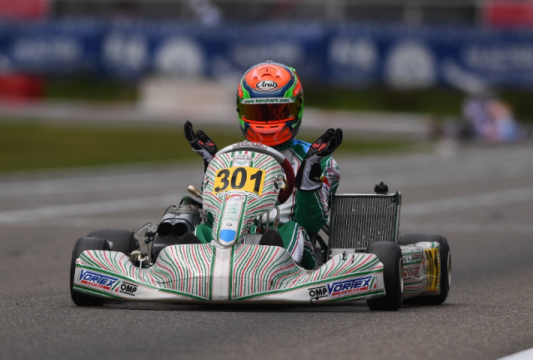 Press Release by: Tony Kart Racing Team
Tony Kart opened the CIK-FIA Championship for KZ2 in Genk (Belgium) with a victory of Viganò. KZ2 podium was completed by the Tony Kart-Vortex chassis of Köhler (KSM Schumacher Racing Team). The very good performance of Hiltbrand and Corberi in KZ class confirms the technical qualities of the Racer 401 S and Krypton 801 S chassis. Next to the winning result is the regret for Marco Ardigo’s injury.
The pinnacle of KZ2's first round of the European weekend came with a clear win gained by Matteo Viganò, who took fourth place in the final grid. Already during the first lap Matteo overtook Leuillet first and then the author of the pole position Köhler at the wheel of a Tony Kart-Vortex-Bridgestone (KSM Schumacher Racing Team).

Our driver took the lead of the race on third lap with a great overtaking on Irlando and ran to the success and the leadership in the provisional European Championship ranking.

On Genk’s podium, with the third place, there was also the Tony Kart-Vortex of the already mentioned Leon Köhler, confirming our chassis competitiveness.

The victory was preceded by an excellent qualifying phase in which, in addition to the top placings of Viganò, they have Alessio Piccini's and to the success in a heat of Jean Luyet at his debut (at international level).

In KZ Pedro Hiltbrand and Luca Corberi’s results were positive, with both drivers entering the top ten list and with the Spanish driver who cut the finish line to fifth place, not far from the podium.

The second round of KZ class, unfortunately, has given us some bad news; the worsening of Marco Ardigò’s injury. This situation will prevent us from defending KZ's continental title won over the past two seasons.