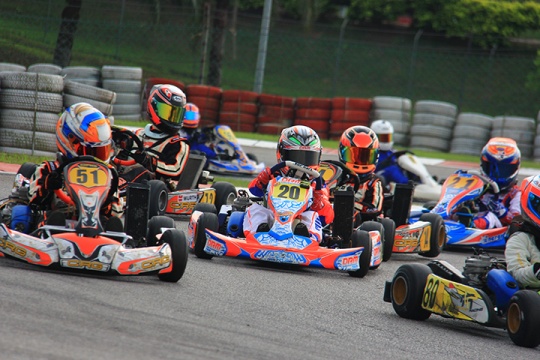 Press Release by: X30 Southeast Asia
Welcome to Malaysia, where the 2nd round of X30 Southeast Asia. Over the course of two days, 80 drivers fought hard amongst a fiercely competitive grid. Round 2 also saw some major changes to the championship standings, with none of the defending champions from Round 1 retaining their positions.
The venue – Sepang International Kart Circuit, one of the top circuits in the country. The Tilke designed track is 1247m long, features 11 turns, and is famed for its long sweepers and flowing corners.

The afternoon sun bears down upon the track. In the oppressive heat, an asphalt ribbon winds its way through grass and gravel, shimmering in the heat and flinging out flecks of sunlight.

During the day, a merciless heat slaughters the senses. At night, torrential rain pummels the earth. Nobody expects any different – it’s the tropics, after all.
Can you imagine it? But despite the weather, and despite the humidity, a tingle hangs in the air... It’s the thrill of racing.

The cadet category saw a field of 20 promising drivers face off against one another.

Cui Yuan Pu was poised for victory after finishing 1st in the Pre-Final to clinch pole for the Final. The Chinese driver continued to lead for the first 11 laps of the final, until an incident in the last lap took him off the podium and shunted him back to 11th place.

Aditya Wibowo and Adam Mikail (DRM Racing Team), who started 3rd and 5th on the grid, capitalised on the situation to finish 2nd and 3rd on the podium respectively.

Also on the podium were Christian Ho from Singapore (3rd Runner-Up) and Tasanapol Inthraphuvasak from Thailand (4th Runner-Up).

All drivers on the grid displayed great sportsmanship and promise.

His impressive performance in the Heats put him on pole for the Pre-Final. The Singaporean driver continued to lead almost uncontested for the remainder of the final phase, and finished the Final as Round 2 Champion.

The weekend saw Putera Adam (I.S Racing – CRG), Cadet Category champion from Round 1, participating in the Junior category instead. The Malaysian driver put up a consistent performance, always within reach of the top 3, until an incident in the Final pushed him back to 7th place. With only 2 laps to go, Putera Adam fought hard and managed to regain two placings, finishing 5th on the podium.

Also on the podium were Nik Zamir from Malaysia (1st Runner-Up), Eduardo Coseteng Jr. from the Philippines (2nd Runner-Up), and Xu Zhenhe from China (3rd Runner-Up).

As usual, the senior category featured the biggest grid with the strongest competition. Just as in Round 1, numerous national and zone title holders gathered to fight for entry and €10,000 in arrive & drive packages to IAME International Final.

On paper, Prassetyo Hardja (Stratos Motorsports – OTK) achieved a perfect finish to the weekend, clinching a fastest lap time of 50.094 in the Qualifying and coming in first in every race thereafter. But in reality it was a hard fought victory, with multiple position changes in every race.

In the Pre-Final, the Indonesian spent the first 3 laps behind team mate Romain Leroux (Stratos Motorsports – OTK), before making his move to snatch the lead. Yeo Hong Yang (AutoInc Racing – BirelART) also put up a tough fight in the 2nd half of the race, challenging Prassetyo Hardja several times before finishing 2nd with a whisker of 0.084s between them.

The first half of the Final was a spider-web of position changes as the top contenders battled hard. Yeo Hong Yang and Prassetyo Hardja were relegated to 5th and 6th position respectively, while Takeharu Nakamori (Musashino Kart Club – Kosmic) emerged from the commotion to lead the pack.

After 8 laps, Prassetyo Hardja clawed his way back to the front, before finally overtaking the race leader in lap 10 and cementing his position as Champion of Round 2, with 1st Runner Up Takeharu Nakamori 1.761s behind.

Also on the podium were Singaporeans Romain Leroux (2nd Runner Up), Yeo Hong Yang (3rd Runner Up), and Round 1 Champion Jason Burns (4th Runner Up).

An incident in Heat 2 resulted in DNFs for both Calvin Wong and Yongboon T., putting Yongboon T. at the back of the Pre-Final starting grid and Calvin Wong in the middle.

In the Pre-Final, both drivers quickly regained positions at the front and Calvin Wong led the pack from lap 10 to 16, before an incident left him stranded on the track and a DNF with 2 laps to go.

The Final saw Yongboon T. dominating much of the race, clinching and maintaining his lead shortly after the start. In the meantime, Calvin Wong clawed his way from the back of the grid to 2nd place, finishing 2.424s behind Yongboon T.

In the Master Category, Ang Kok Wee from Singapore (7 Racing – Kosmic) was the protagonist the entire weekend, achieving a perfect result over 2 days for a 1st placed finish. Round 1 Champion Brendan Lim displayed considerable pace in Heat 1 and 2 (7th and 5th) despite qualifying 11th, but suffered multiple collisions in the Final that resulted in a bent steering column and a position at the back of the pack.

After a disappointing first round in April, 2015 Veteran Champion Lee Lung Nien (7 Racing – Kosmic) bounced back last weekend to prove he still has what it takes. Having found his footing against Round 1 Champion Jeremy Lee and rival Leon Khoo (AutoInc Racing – BirelART), Lee Lung Nien once again stood on the podium as Champion of the Veteran category.