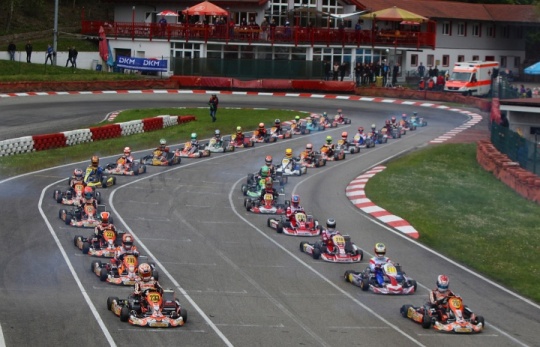 Press Release by: CRG Racing Team
CRG had a great start of the DKM in Germany at the circuit of Ampfing dominating KZ and scoring great results also in OK and OK-Junior.
The round of Ampfing has been the opener of DKM and CRG has been protagonist once again with its drivers, after last year’s very successful campaign in which the Italian make secured the title in all categories.
CRG kept its momentum in Ampfing especially in KZ winning Race-1 with Flavio Camponeschi as CRG chassis locked out the podium, and Race-2 with Stan Pex, as five CRG chassis completed the top five. This was an absolute dominant run.

CRG, CLEAR DOMINATION IN KZ
Flavio Camponeschi, back to KZ for the occasion with CRG Deutschland Rutsch & Herpich GbR, has been shining with the win qualifying heats and claiming an authoritative victory in Race-1 leading Jorrit Pex and Fabian Federer, while last year’s winner of the KZ2 Cup Max Tubben, closed his effort in P5. Alexander Schmitz and Stan Pex were also among the quickest of Race-1, ending respectively seventh and ninth for CRG Holland. Among the emerging talents, Alessandro Giardelli posted a great time in qualifying, posting tenth quickest laptime just one tenth off pole sitter Fabian Federer, but in Race-1 Giardelli has been forced to the retirement due to a contact early into the race. Mirko Torsellini had some problems and was 25th in qualifying and 18th in Race-1.

Flavio Camponeschi’s comment after Race-1: “I am really happy about the result of race one. A really good race, I did not make mistakes.
It was really hard as the others were very close behind me and there was no room for error. I just focused on the race, I kept concentration high in every single corner. This championship is very competitive and I am happy for the result. It was a great team effort.”

The second final saw Stan Pex coming to the fore dominating Race-2 after a recovery run started from P9, but Flavio Camponeschi has also been superb after a contact with Daniel Stell early on. Camponeschi lost a few places but then made up for the lost time climbing back to P3, engaging a battle for second with Jorrit Pex. CRG colors monopolized the five-places podium of DKM with Stan Pex, Jorrit Pex, Camponeschi, Federer and Schmitz closing in the order. Tubben finished in the top ten in eighth place, Toni Tschentscher was ninth with SRP racing Team. Giardelli has been quick and aggressive recovering 14 places to the 18th final place, Torsellini was still affected by some technical issues and ended 20th.

Stan Pex’s comment: “We did a good job in Race-2, while everybody chose to put on new tyres in the first final I went for the old ones. We won Race-2, so I think it was a good choice. I had a good start from P9, I got some positions back and then I passed the others, built a bit of a gap and it was easier in the end. I am happy for my brother Jorrit, he also run a good race, and scored some good points with two second places, but I am happier for my win! It was good racing especially in the front, high level, a lot of fans. We are very happy about this first race of DKM.”

In KZ2 Cup, the Dutch driver of CRG Holland Jeroen Bos was third in Race-1, while Luka Kamali and SRP Racing Team claimed P3 in the second race.

MEYER VERY QUICK IN OK
The young Spanish driver Kilian Meyer of CRG Holland has been under the spotlight in OK, taking a stunning pole position and showing a good confidence in his first season in this category. Among CRG drivers, the Dutch Glenn Van Berlo of CRG Keijzer Racing Team has been the best taking the second place leading team mate Luca Maisch, while Meyer closed his effort in P4. DKM 2016 Junior title winner Dennis Hauger was eventually seventh. He won the race leading the runner up by more than 2 seconds, but was then handed a 5s time penalty due to the front fairing dropped at the start from P10. Meyer confirmed to be among the quickest in Race-2 ending fourth, leading CRG TB Racing Team’s Tim Troger and Hauger. Maisch was eighth instead.

SASSE THE BEST OF CRG DRIVERS IN OK-JUNIOR
Following the pole position set by Fabian Federer in KZ and that of Kilian Meyer in OK, CRG has claimed another pole position in OK-Junior with the German of CRG TB Racing Team Hugo Sasse. Sasse confirmed his speed also in the heats and later on ended Race-1 in second place, as team mate Niels Troger was fourth and RL-Competition’s Marius Zug fifth. Sasse claimed a fourth place in Race-2 leading Troger and Zug, while Pietro Delli Guanti was seventh in Race-2 at the debut with the CRG colors of team CRG Keijzer, leading the Spanish driver Donar Nils Munding of Kalì-Kart Stern Motorsport. Luca Giardelli was twentieth instead in Race-1 and twenty-seventh in Race-2.

Next rounds:
All results are available at www.kart-dm.de/en/home/